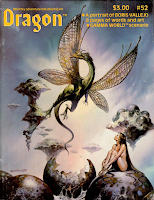 With the 2nd edition of Blood & Treasure essentially done (well, almost done), I can get back on track with these Dragon reviews. Number 52 is from August of 1981, and features a Boris Vallejo cover of a butterfly-winged dragon and beautiful naked woman ... which of course is a rarity for a Boris painting. Boris gets a little full article inside the magazine as well.

So - I've got Mystery Science Theater 3000 on the television and a gin gimlet in my belly, and I'm ready to show off the bits and pieces that I found useful and/or inspirational in #52 ...

First and foremost, a nice piece of comic/advertising work by Bill Willingham, one of my favorites from the olden days. 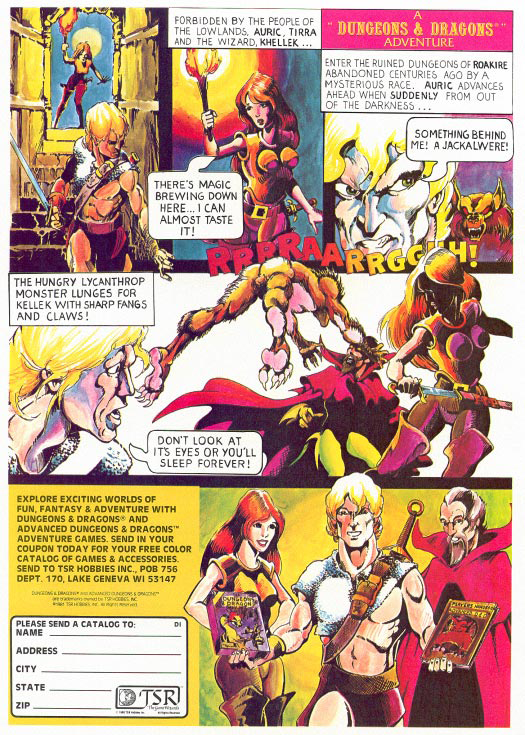 This involves the adventurers Auric, Tirra and the wizard Khellek (who does not appear to be this guy - scroll down a bit). Auric is an ill-armored fighter, Tirra could be a thief or fighter and Khellek is a wizard. They tangle briefly with a jackalwere and then ... to be continued.

The first real article is dedicated to the much maligned cleric class. "The Role of the Cleric - Warriors with Wisdom" is by Robert Plamondon, and it does a nice job of explaining the class, some of its inspirations and ways to play it well. If the image below, by Jim Holloway, doesn't make you want to play the class, I don't know what will ... 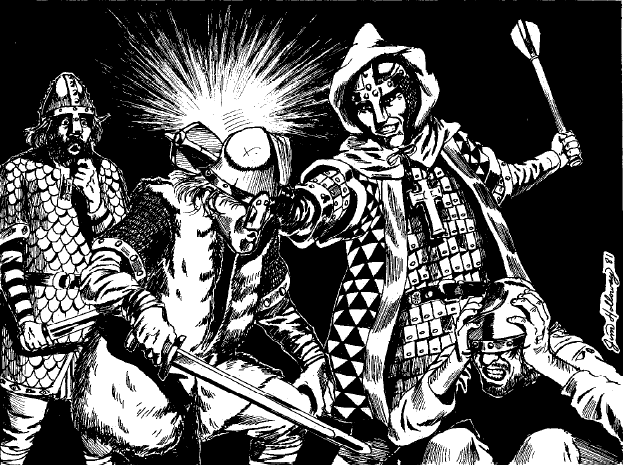 The article has a few nice bits that might stir the creative juices of players and GM's out there, such as a list of acts of worship, in order of potency:

Turpin of Rheims, finding himself o’erset,
With four sharp lance-heads stuck fast within his breast,
Quickly leaps up, brave lord, and stands erect.
He looks on Roland and runs to him and says
Only one word: “I am not beaten yet!
True man never failed while life was in him left!”
He draws Almace, his steel-bright brand keen-edged;
A thousand strokes he strikes into the press.
Soon Charles shall see he spared no foe he met,
For all about him he’ll find four hundred men,
Some wounded, some clean through the body cleft,
And some of them made shorter by a head.
— The Song of Roland, Laisse 155


So Turpin got to swing a sword, why doesn't your cleric? Well, to start off with, Turpin also doesn't get to cast spells or turn undead. Douglas thinks the rule should be thrown out, because its not "realistic" and because in AD&D the mace is as good as sword. I disagree - swords are more than just a damage range, but the "no sharp weapons" rule also takes many magic weapons out of a cleric's hands, thus helping the old fighter stay relevant.

Douglas Loss is back with "The Sense of Sacrifices", and this is a neat one about the chances of deities granting clerics spells they aren't high enough in level to cast. It all hinges on sacrifices of inanimate objects (valuable or symbolic, of course), animals and sentient creatures of a wildly different alignment than the cleric. To boil it down - 2% per 100 gp value of inanimate objects, symbol items 5%, animals 2% (or 3% if it is favored by the deity) and 5% for sentient beings. The chance shouldn't be higher than 50%, and each subsequent miracle should have a 5% penalty applied if the cleric tries this too often.

Sage Advice is cleric-centered as well. I enjoyed how this answer began:


Q: What happens when a Resurrection or a Raise Dead is cast on an undead?

In other words - crap, we hadn't thought of that.

For lovers of the old school, the cleric stuff is followed by two articles concerning the new Basic D&D set. The first is written by J. Eric Holmes, author of the first edition, and the second by Tom Moldvay himself. Holmes has the longer article, and it explains the hows and whys of Basic D&D. Holmes fans have probably already read it, but if they haven't, I would highly suggest it.

For modern gamers, Paul Montgomery Crabaugh's "The Undercover Job Guide" can be useful ... especially if they're setting a game in 1981. Written for TOP SECRET, it covers a number of jobs and gives you some ideas on their access to travel and their salaries. Here are a couple of items:

Home Economics: travel potential moderate to high; starting salary $20,000/year (variable); almost no connection with what the field is normally thought of to include: agents in this field will very likely be chefs, or connected with the creation of fashion or decoration: female agents have a good chance of being models (salary quite variable).

Physical Education: travel potential high; starting salary quite variable; almost certainly an agent will be an athlete in this AOK: by preference, one in a sport played throughout much of the world. Tennis is an excellent choice; golf, soccer and track & field are also good.


Yeah, a pair of spies who work in a high school would be pretty fun.

This issue's Giants in the Earth by Katharine Brahtin Kerr covers Prospero (Lawful Good 14th level magic-user), his pals Ariel (a neutral "high-grade" air elemental - I would have gone sylph, mostly because Ariel is a sylph) and Caliban the chaotic evil half-orc, and Circe (chaotic neutral 18th level magic-user). Here's a nice bit ...

The best way to get the upper hand over Circe is to possess the strange herb known as moly. The god Hermes gave Ulysses some of this herb, said to grow only in Olympus. With it, Ulysses mastered Circe’s magic and made her turn his crew back into men from swine. If the DM wants moly available in the campaign, it should either be fantastically expensive or else a gift to a cleric from his or her god. 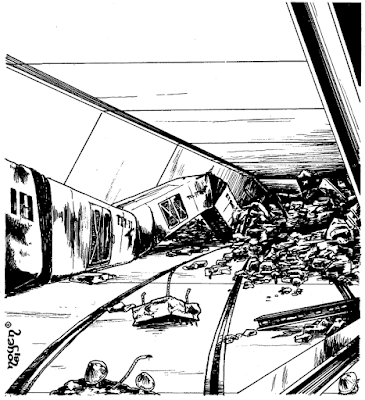 Dragon #52 also has a groovy little Gamma World adventure by Gary Jaquet called "Cavern of the Sub-Train". This might sound like a subway romp in the ruins of New York, but it's actually a romp through something more like Elon Musk's hyperloop. This network spanned the entire North American continent.

The adventure is left open-ended, so should come in handy to folks playing post-apoc games.

Lewis Pulsipher has some interesting, peaceful gas-filled beasts called pelins. Not much for a fight, but they're semi-intelligent, so maybe they could be helpful in completing a quest if the players are smart enough to be nice to them and attempt communication.

Michael Kluever gives a nice history of siege warfare in "Knock, Knock!". Worth a read for people new to the subject.

Up next are three - count 'em three - takes on the bounty hunter class by Scott Bennie, Tom Armstrong, and Robert L Tussey and Kenneth Strunk. Lets judge them by the most relevant part of the class - the class titles! 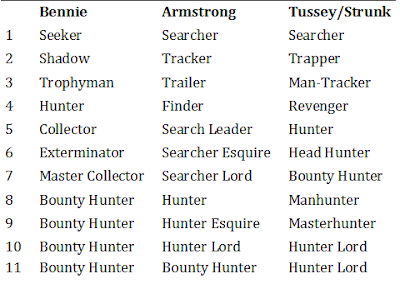 The use of revenger, head hunter and manhunter are nice, but the inclusion of esquire by Armstrong wins the competition. Anything that can bring Bill & Ted into the conversation can only be good for a D&D game.

Hey - what the heck is this? 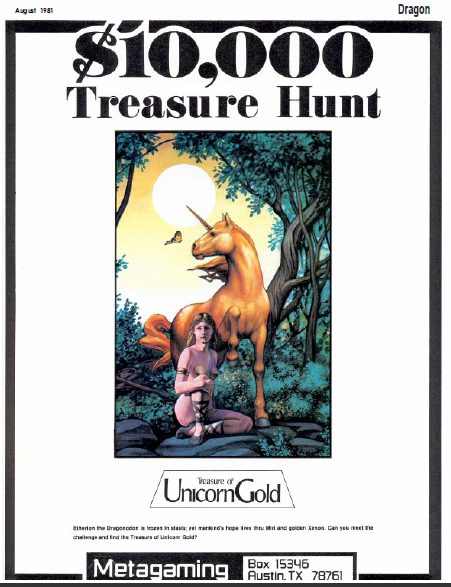 A Google search brings up a computer game designed for use with the Fantasy Trip. Pretty cool!

Not a bad issue - more advice-centric than number-y, but you get bounty hunters and a paralyzing lizard, so what the hey!

I leave you as always with Tramp ... 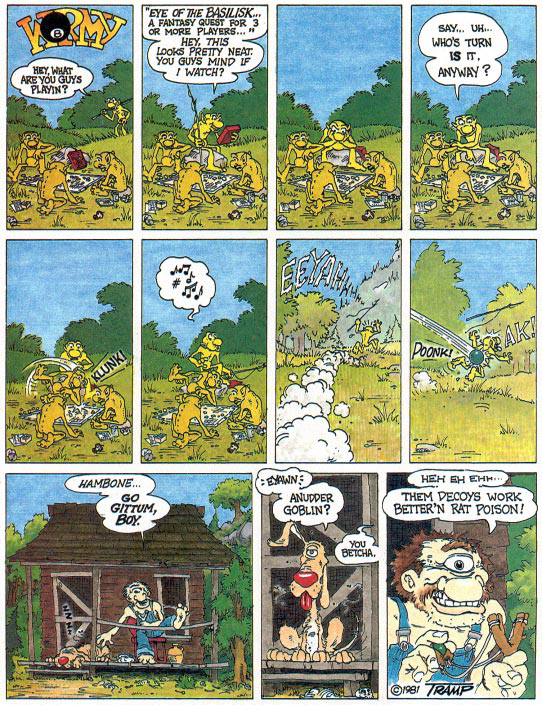