You never know what will inspire an idea, and this one came from watching an episode of Father Knows Best before driving to work. In this particular episode, good old dad tells Bud to use his charm when trying to apologize/ask out a girl. Now, Bud was already in the position of apologizing to the girl because of his so-called "charm", so the interchange got me thinking about the value of putting extra effort behind a task.

In games, we often have characters making skill or ability checks of some kind, assuming they are putting forth their best effort to accomplish the task at hand. Maybe they are ... but I suppose we've all been in the situation of "coasting" by on things we're good at, or even of not trying all that hard to do something we know we're bad at. There are times, though, when something must be done, and so we focus just a bit harder on success. In terms of Charles Schultz's Peanuts strips, it looks something like this: 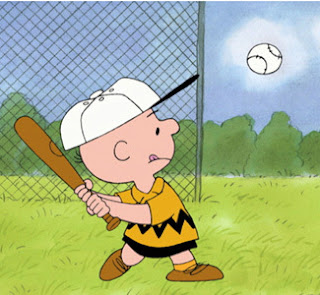 That tongue sticking out means Charlie Brown is digging deep and putting all his effort into it. So, how do you do this in a game?

The simplest way is to give the players a once a session or even "once per day" chance to really focus on a task or saving throw or maybe even an attack. For attacks and saving throws, you might give a +1 bonus, while for skill and ability checks, a +2 or +10% bonus. You could also just allow a single re-roll on a failed try at something.

So - what does this extra effort cost?

Maybe nothing. I've heard some supposed experts speak on the subject of will power, forwarding the idea that we all have it, but in limited supply. This "extra effort" bonus could just be a free gift to the players.

You could also make it a trade off. Maybe putting forth extra effort involves becoming fatigued for a period of time - say an hour. You could even split mental fatigue from physical fatigue.

If the group is touchy-feely, perhaps the player has to share an episode in his or her past in which they had to dig deep to do something, or in which they goofed off and really screwed up.

If you want to get really nasty, make players spend a few XP for that extra effort - not a huge amount of XP, of course, but maybe 10 or 25.

Oh - and make the player stick their tongue out of the side of their mouth while they're rolling the dice. That I insist upon!
Posted by John Matthew Stater at 9:58 AM