On Monks and Swashbucklers 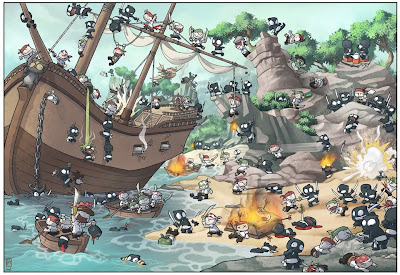 This post will finish my posting of the hybrid "fighting-man" classes I was using in my last game, and it involves the oft-maligned monk. Now, I grant you that the monks as presented by Gygax lo those many years ago do not fit into a medieval milieu. On the one hand, I want to say - who cares? I run my games for fun, not verisimilitude. On the other hands, lots of folks do want their games to make sense and stick to a sort of "reality". For those folks, allow me to suggest that the monk is still a usable class. The trick is to ignore the name and the "fluff" and just look at the game stats. What you have is a non-armored combatant who is quick and generally hard to kill. In other words, a very acceptable way to emulate a swashbuckler or two-fisted pulp adventurer. Heck, I've even used the class to stat out Popeye (don't ask). So, before you relegate the monk (or any other class) to the dustbin, think about how you can adapt the flavor to the mechanics.

The Monk Sub-Class
The monk is a sub-class of fighting-man. Monks train themselves in the unarmed martial arts, including wrestling. They develop lightning fast reflexes and iron wills. Most monks are trained in special monasteries, but some simply apprentice themselves to a fighting master. Different masters and monasteries use different techniques, and they (and their students) are often quite competitive.

At level 6, a monk can make a second unarmed strike each round. The secondary strike's damage begins at 1d4 and improves to 1d6 at level 9.

A monk's movement improves by +1 at each level. A monk carrying a medium or heavy load loses this extra speed.

A level 1 monk can use a stunning attack once per round, and no more than once per level per day. The monk must declare its use before making an attack roll. A missed attack roll ruins the attempt, and counts towards the monk’s limitation. A foe successfully struck by the monk is forced to make a saving throw. Those struck by a stunning attack always take normal unarmed attack damage, but a failed saving throw results in the foe being stunned and unable to act for 1d4 combat rounds.

At level 2, monks gain the ability to deflect arrows and other non-magical missiles. The monk must have at least one hand empty to use this ability. When a character would normally be hit by a ranged weapon, the character may make a saving throw. If the saving throw succeeds, the monk deflects the weapon and suffers no damage. This can be done once a round at levels 2-6, and twice at levels 7-11 and three times at 12th level. The monk must be aware of the attack to use this ability. An attempt to deflect a weapon counts as the monk’s primary unarmed attack. If a monk is high enough level to have a secondary unarmed attack, the monk may still make the secondary attack. This ability cannot be used against siege weapon ammunition.

At level 4, a falling monk takes damage as if a fall were 20 feet shorter than it actually is, but must be within 10 feet of a vertical surface that he or she can use to slow the decent.

At level 6, a monk can feign death for a number of turns equal to the character’s level.

At level 7, a monk’s naturally healing increases to 2 hp per day.

At level 12, the monk gains the fabled quivering palm attack. The monk can use this attack once per week. The attack must be announced before an attack roll is made. The monk must be of higher level than the target. If the monk strikes successfully and the target takes damage from the monk’s unarmed attack, the quivering palm succeeds. Thereafter, the monk can choose to try to slay the victim at any later time within 1 round per level of the monk. The monk merely wills the target to die, and the victim makes a constitution saving throw to avoid this fate.

This attack has no effect on undead or creatures that can only be struck by magical weapons, unless the monk is able to inflict damage on such a creature.

The Swashbuckler: If you don't think that a kung-fu-style monk fits into your campaign, you can rebrand the class as a swashbuckler. In this case, the monk's "unarmed attacks" are instead made with long sword (rapier) and dagger, and only with these two weapons. The stunning attack can represent a dizzying flourish of arms or a pommel guard to the head. The quivering palm can be renamed "the lunge", representing that moment when the swashbuckler stabs his foe, who then staggers about for a moment before expiring with a look of disbelief in his eyes.