On the Wyvern Coast

The first map grid I'm going to detail on this blog is J11, which contains the Wyvern Coast and the Nabu Desert. This first post will give an overview of the area. 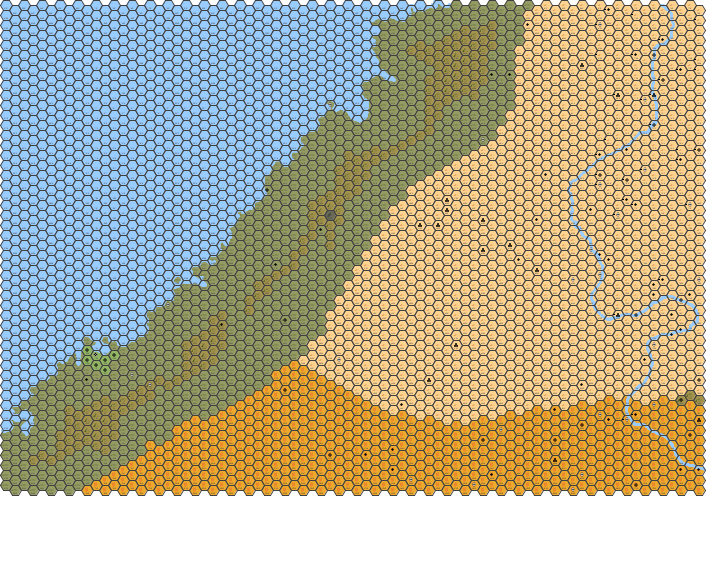 Map J11 - History
During the Pandiluvian Age, what is now the Nabu Desert and Pwenet savanna was a shallow sea and the Wyvern Coast was a series of rocky islands. The elder things and fish men built their cities in this shallow sea, leaving the rocky islands to wyverns, chimera and a few primitive men.

When the waters receded, they left a great grassland dotted with trees and a range of highlands and mountains along the sea. The elder things and fish men retreated with the sea, with the ancient lizard kings and their human slaves filling the void. For centuries the lizard kings fought over the savanna and left the coast to monsters and primitive hill tribes. Finally, human slaves overthrew their reptilian masters and established themselves in the city-states they once built and labored in as slaves.

In the northern reaches of the savanna, the humans established a sorcerous empire under the command of a mysterious king called Nabu, who ruled from a city-state called Per-Nabu. The Nabu Empire made war against their neighbors and established colonies and tributary states along the Wyvern Coast, into the barbarian-infested woodlands of Venatia to the north, and into Pwenet, the southern reaches of the grasslands. Eventually, they came into contact with the rival empires of Kolos in the jungles of Cush and Irem far away in the west. These ancient superpowers clashed at sea and on the land, and eventually summoned up powers well beyond their control. Kolos became a lost city, its people scattered through the jungles. Irem and Nabu, on the other hand, were blasted by the gods (or so it is said), their domains becoming wastelands.

In the aftermath of the cataclysm that struck Nabu, its colonies either became independent city-states in their own right, or simply melted into the wilderness. Nabu’s northern forts in Venatia were overcome by the barbarians and destroyed, not to be colonized again until the great expansion of the Nomo Empire. Nabu’s port of Ibis on the Golden Sea became a powerful city-state and remains one to this day. The tributary ports on the Wyvern Coast rose to prominence for a short time, their rulers being called the “Purple Kings” due to the dies that help make their fortune. Nabu itself is now known as the City of Death on the aptly named River of Death, its vast treasures and terrible knowledge waiting to be discovered by courageous adventurers.

Geography
Map J11 is mostly hot and arid, with the coast, grasslands and high mountains being slightly more pleasant than the sun-baked hills and desert sands. The four geographic regions represented on the map are the Nabu Desert, the Pwenet Grasslands, the Tepid Sea and the Wyvern Hills.

The Wyvern Hills were once controlled by a dynasty that is now referred to as the “Purple Kings”. At the height of their power, these kings established many colonies on the Tepid Sea. In their later years they fell under the dominance of the Nabu Empire. When that empire was destroyed and its grasslands scorched, most of the Purple City-States were abandoned and fell into ruin. Only Ophir, the greatest of them, exists to this day.

The people of the coast and hills are a bronze-skinned mixture of Motherlander and Lemurian. The grasslands are home to pure-blooded, swarthy Lemurians.

Each day and night the Referee should dice for the chance of a dangerous encounter. Generally, there is a 1 in 6 chance of such an encounter, or a 1 in 8 chance if a ranger is present. There is an equal chance of becoming lost.

In the next couple of days I will show the northeast quadrant of Map J11, describe the Tepid Sea and Wyvern Coast, provide some random encounter tables and describe some major set encounters.
Posted by John Matthew Stater at 10:11 PM