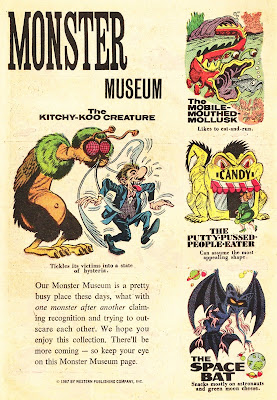 Saw this at Magic Carpet Burn (scroll down to see picture in question). It's too bad that monsters in fantasy games need to be engines of destruction, because the Kitchy-Koo Creature would be a great way to disturb the hell out of a bunch of PCs. Maybe just make it completely immune to attack and let it follow the PCs around, tickling when things get boring and only leaving when they feed it some sugar.

The kitchy-koo creature materializes behind a party of adventurers and begins to tickle the rear-most member of the group. Tickled adventurers will begin to laugh loudly (possibly attracting wandering monsters) and will find it difficult (saving throw) to do anything else. If attacked, the creature will seemingly disappear only to reappear later to repeat its bizarre "attack". The creature can be bought off with honey and nothing else. If communicated with, it is capable of using its clairaudience and clairvoyance abilities to see beyond doors and otherwise aid adventurers. Such help is only rendered in exchange for honey. Kitchy-koo creatures seem to inhabit specific dungeons, though their true home is somewhere between dimensions. Once attacked or communicated with, it will continue to appear at random intervals to harass a party of adventurers.

The space bat isn't bad either, for those forays into the Astral Plane.
Posted by John Matthew Stater at 3:10 PM