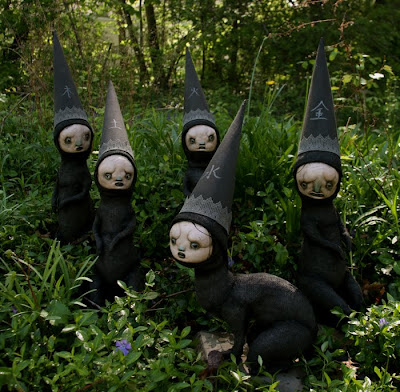 I don't know what the heck these things are, but I know I don't want to run into them in a dark woodland on a crisp, cool fall day. They are the creation of Scott Radke. If I was running them as an encounter, it would be as the adventurers were walking through an old, tired forest on a narrow path hemmed in by ferns and spikes of dull, beige flowers. Everything would seem normal enough, but then one by one they would become aware of these things, standing amidst the ferns, staring with their tortured eyes. Approaching them would cause them to scurry into the underbrush (and effectively make them invisible and silent). Attacking them would elicit a mind-piercing shriek and cause them to flee in the same way described above. The shriek would work like a Psionic Blast*. If nothing is done, they will appear to follow the adventurers through the woods, just popping up along the path as the adventurers walk. During this time, they will begin to evoke powerful emotions in the adventurers, sorrow, anger, etc - all of the character's emotional baggage, especially concerning fellow adventurers, will bubble to the top.

* Psionic Blast: A psionic blast works like an ego whip, but instead stuns creatures in 30-ft cone emanating from the psychic’s forehead. A psychic suffers a -5 penalty to activate a psionic blast.
Posted by John Matthew Stater at 8:49 AM

Email ThisBlogThis!Share to TwitterShare to FacebookShare to Pinterest
Labels: Art