As I've mentioned before, I'm working on creating a set of rules based on Swords & Wizardry called PARS FORTUNATM. The gimmick is that the races, monsters and magic items are all based on things generated using a variety of online random generators. I'm also including a host of alternate rules - a different magic system, loads of spells adapted from non-traditional sources, etc. The idea is that the game will be playable as is, or could serve as a toolkit for those wishing to spice up their existing old school games. In the end, it may come to nothing, but its a fun experiment for me.

Here then is the first preview, a race/class called the Caledjula. This race has shown up on the LAND OF NOD blog before, but here has been turned into a class and refined somewhat. Of course, the most obvious take away from this preview is that I need to hire an actual artist to illustrate the game. 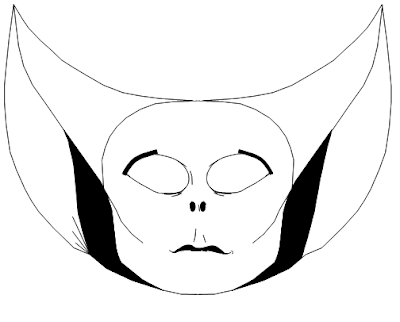 Caledjula (The Sky People)
Caledjula are tall, statuesque humanoids with angular bodies, reddish-orange skin and black hair. Their heads are shaped like sidewise crescents, the peaks being their over-sized ears. Their eyes are large and brightly colored. Their long arms end in hands with seven thin fingers.

Caledjula have a radar-like sense reminiscent of bats. They are capable of imitating all sorts of speech, and their pleasant, deep voices and calm demeanor make them excellent diplomats. Caledjula are natural illusionists, with an inborn talent for creating minor figments and phantasms. Most importantly, the caledjula can fly thanks to a strange and little understood gland in their brains.

The caledjula dwell in the mountains. They hire themselves out as heralds, orators and cryers, and often serve in the retinues of merchants and nobles. They indulge in multi-colored garments, always close-fitting and flamboyant.

Healing: The caledjula excel at the healing arts. Any creature given over to their long-term care heals an additional hit point each day and enjoys a +1 bonus to saving throws made to fight off disease. In addition, a caledjula with a healer’s kit has a 2 in 6 chance of neutralizing poisons and a 2 in 6 chance of restoring 1d4 hit points after a battle by applying first aid.

Magic: Caledjula can cast magic spells. See the section on Magic for more information about this powerful ability. In addition to the spells a caledjula can learn as a magician, all caledjula begin the game knowing one illusion that they can cast once per day. This spell is chosen from the following:

• Dazzling Lights: This spell creates a pattern of lights that dazzles all creatures of 1 HD or less within 10 feet, causing them to suffer a -1 penalty to hit in combat. Each creature is allowed a saving throw to avoid this.

• Ghost Sound: Ghost sound allows you to create a volume of sound that rises, recedes, approaches, or remains at a fixed place. You choose what type of sound ghost sound creates when casting it and cannot thereafter change the sound’s basic character.

• Prestidigitation: Once cast, this spell enables you to perform simple magical effects for 1 hour. A prestidigitation can slowly lift 1 pound of material. It can color, clean, or soil small items. It can chill, warm, or flavor 1 pound of nonliving matter. It can create small, crude, fragile objects that cannot be used as tools, weapons, or spell components.

• Smoke Image: This spell shapes existing smoke into any shape, creature or object the spellcaster can visualize. The image is composed entirely of smoke and if disturbed dissipates back into smoke.

• Ventriloquism: You can make your voice seem to issue from someplace else. Anyone who hears the sound and rolls a successful save recognizes it as illusory.

Radar: A caledjula’s radar sense allows them to fight without penalty in complete darkness. They cannot see in the dark, but they can navigate through pitch black halls and caverns without running into things.

Voices: Caledjula are natural mimics, and have a 3 in 6 chance of successfully imitating voices and sounds. The gregarious personalities and sonorous tenors of the caledjula make them natural public speakers. Caledjula enjoy a +1 reaction check bonus when parlaying with monsters and other folk.