On Wilderness Adventures - Part One 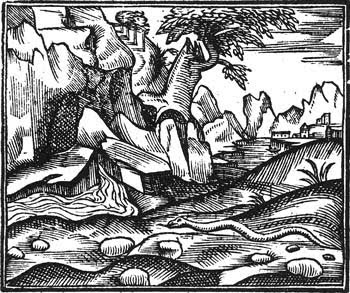 This is some information I cobbled together when I was trying to create some guidelines for my campaign regarding wilderness adventures. I found the move a hex, roll for encounter stuff a bit boring, and was trying to find a better way. These guidelines might prove useful to some, though I never felt as though I had them right. I'll mention that the movement rates are what they are because I was using 6 mile hexes.

Travel
The following table shows the normal rate of travel (in miles per day) for different modes of travel. The first number is over easy terrain, the number in parentheses for difficult terrain.

Events
Each day, there is a 1 in 6 chance that a random encounter occurs. In addition, each wilderness hex the adventurers travel through holds set encounters they might find. Adventurers may come across one of these encounters accidentally (1 in 6 chance) or by searching.

Random monster encounter tables should be provided for each wilderness area. In addition to the threat of the monsters, the Referee must determine the battleground on which the encounter takes place. Battleground in this case includes not only the terrain where the encounter occurs, but also the weather and tactics of the enemy. Battlefields and battlefield conditions are addressed later.

Wilderness Types
The following wilderness categories are used in NODTM.

Aquatic
Aquatic areas are filled with fresh water and include lakes, rivers, streams and canals.

Grassland
A grassland is a flat area or an area of gentle, rolling hills that supports grasses, sedges, herbs and few to no trees. Prairies, meadows and savannas are all grasslands. Steppes are semi-arid grasslands that usually separate deserts from woodlands.

Mountains
Mountains are very tall highlands bordered by highlands or separated from other mountains by passes or valleys.

Tundra
Tundra is a scrubland or grassland located in a cold area. They are often marked by permafrost. A tundra can be flat, rugged or mountainous.

Wastelands
Wastelands are hot, arid expanses of sandy or rugged terrain. Rocky deserts that support succulents and/or scrub. Sand sea deserts are covered with shifting dunes that can measure over one hundred feet in height. Either kind of wasteland might have scattered oases. An oasis is a fresh spring surrounded by vegetation. Some oases are large enough to support strongholds and villages.

Woodland
A woodland is covered by a closed or opened canopy of trees. It might be flat or hilly. Jungles are tropical woodlands that often contain swampy areas. Taiga are coniferous forests found in cold climates.

Dangers
Dangers are threats one must plan for and deal with while traveling through the wilderness. Each danger listed below can be avoided by taking a number of precautions. Failure to do so results in penalties that accrue before a battle or by the end of the day.

Most of the dangers result in fatigue. Each source of fatigue an adventurer (or his mount) suffers results in a -1 penalty to all actions (attacks, saving throws, attribute checks) and one half penalty to movement.

Cliffs
Adventurers that are traveling through mountains and rugged highlands need to link themselves with ropes and carry miner’s picks. Most importantly, they need to avoid being anything more than lightly encumbered.

Penalty: 1d6 points of damage from falling and exertion, half with a successful dexterity saving throw.

Cold Weather
Characters need double food rations in cold weather. Characters must find shelter at night and start a camp fire (requires a flint and steel and a tinder box or a saving throw). Shelter can be an existing cave or it can be built. Building a shelter requires such items as pickaxes (for an igloo), hammer, string and axe.

Getting Lost
Besides using proper equipment, one should take the time to climb trees and hills to sight the area (when possible). Spells like find the path are a perfect substitute for proper equipment and smart adventuring.

Hot (Dry) Weather
Characters should only travel at night and must consume an extra water ration each day to avoid dehydration. If traveling during the day, one must keep the sun off their skin by dressing in robes, cloaks, caftans and hats. Characters should avoid any armor heavier than a mail shirt. It is also important to rest often by cutting daily travel distance in half.

Hot (Humid) Weather
Humid weather is draining. One should avoid wearing much clothing (natives of such environments are naked or practically naked), including armor. Characters must rest often by cutting their daily travel distance in half.

Hunger
Bring food or bring somebody who can hunt for food. Spending time hunting cuts daily travel distance in half. Bringing traps and/or fishing gear gives a +1 bonus to survival saving throws. The spell create food and water makes enough food for three humans or one horse per caster level. This food will spoil after a couple of days.

Penalty: Each day without food results in fatigue. A week without food inflicts 1d4 points of damage. Creatures brought to less than half their normal hit points from lack of food will suffer one point of random ability score damage each day.

Swimming
A creature can swim at one quarter of their movement rate for a number of rounds equal to its constitution score. Swimming for each round beyond that requires a saving throw.

If forced to stop swimming, a creature can tread water for a number of rounds equal to their constitution score. Treading water for each round beyond that requires a saving throw.

Failure to tread water results in sinking. A creature will sink 5 ft each round. Creatures can hold their breath for a number of rounds equal to their constitution score. Holding one’s breath for each round beyond that requires a saving throw. When a single such saving throw is failed the creature drowns.

Thirst
Most environments allow for the collection of water as one goes; unfortunately, this water is not always safe to drink. This problem can be solved with a purify food and drink spell. Without it, adventurers run a 30% chance of being sickened, with a failed constitution saving throw indicating nausea and forcing the adventurers to make camp for 1-3 days.

A day with sufficient water leaves one fatigued. A day without any water inflicts 1d6 points of damage and causes fatigue. Creatures brought to less than half their normal hit points from lack of water will suffer one point of random ability damage each day.

Vermin
Depending on the terrain, vermin are almost impossible to deal with. Food can be kept in water skins and hung from trees to make it safer from vermin. Adventurers can sleep in tents and burn sticks on incense to ward away mosquitoes and other disease carriers. Boots should be shaken vigorously before being put on in the morning. Complex perimeters formed of string and little bells are of dubious utility.

Penalty: Lose one day of rations and succeed on a constitution saving throw or suffer fatigue from sickness and poisonous stings.

Wear and Tear
Each night, armor and weapons must be oiled and stowed away. Bows should be unstrung (a spare bow could be unstrung during the day and kept strung at night). Metal weapons should be sharpened. One can use a mending spell if without proper equipment.