On Ophir, The City of Slaves - Part One 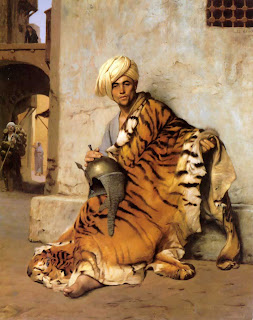 Ophir is a city of corsairs and cut-throats, slave markets and crowded bazarres, opium dens and danger around every corner. It is the great black market of the Motherlands, where anything is for sale.

Ophir is a center of the slave trade and a black market for stolen goods, especially magic items. No questions are asked in Ophir, so long as the guild and the prince get their 50% cut. Most nearby city-states keep factors in Ophir to hunt for desired magic items.

The archetypal Ophirian has blue-black hair, brown eyes and tanned skin. Citizens wear colorful robes over tunics and sandals on their feet. Turbans are common among the men, while women wear silk scarves or tie their hair up with ribbons, strings of pearls or golden chains. It is common for people to anoint their hair with scented oils, and guests in Ophirian homes always have their feet washed and anointed with oils when they arrive.

Ophir’s men-at-arms wear distinctive red scarves around their pointed helmets. They are equipped with chainmail, shield, short sword (falchion), light crossbow and 10 crossbow bolts. One guard in ten carries a heavy crossbow. Every group of more than three soldiers is accompanied by a sergeant-at-arms, and there is always one sergeant for every ten soldiers. Groups of twenty or more are commanded by a captain.

The people of Ophir speak with a rough, earthy dialect. Many are wanted by the authorities of other city-states and are kept in line by their fear of Prince Zargo’s assassins and the might of the guild of thieves.

Gambling is a common past time in Ophir, usually using dice. The locals also enjoy pit fighting (to the death). Horse and camel races are conducted in some of the dry river beds near the city. The city-state boasts two champions of the Herculean Games held in Guelph.

Ophir’s economy is based on the slave trade and the black market. Ophir’s domain is composed mostly of dry, volcanic soil. The city-state is surrounded by a cedar forest and a few pleasant meadows that support goat and sheep herding. Most commoners make their living from the sea as fishermen or sailors.

Next, a map of the "adventurer's quarter" and I begin to detail the folks who live there.
Posted by John Matthew Stater at 11:23 AM