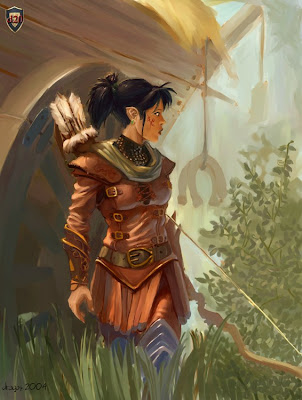 Ah - the unlucky post. Five more encounters for Western Venatia. If all goes well, I'll publish PARS FORTUNA this weekend. I'm still waiting for one last piece of art - if it comes through I'll publish the complete rules on Lulu.com - should go for $15 in book form, $7 in e-book format - and the basic rules in the free download section on this blog. If the picture doesn't come through, I'll still probably publish the free version. Cross your fingers.

1636. All that remains of an ancient elf hunting lodge is a support column carved to look like three thin beeches braided together. A stone foundation traces a large footprint – the lodge must have been quite a sight in its day. There is little rubble left from the thing, and the forest is slowly but surely reclaiming the site. Should one rap three times on the surviving column, a trapdoor will open nearby to reveal a set of stone stairs descending into a cellar. The cellar is divided into two sections. The first is a fairly common root cellar loaded with urns, amphorae and barrels of spoiled or dried foodstuffs and sour wine. In one wall of the root cellar there is a sturdy, steel door that is quite cold to the touch – cold enough that prolonged contact begins causing frostbite (1d4 damage).

Behind the frozen door there is a small chamber with steel walls that was magicked long ago into a sort of freezer. Freezer-burned sides of venison and fowls hang from hooks in the ceiling, and in one corner there is the preserved remains of two elves, a woman and man. The woman was quite old (young looking, but with long ears) and is sitting in the corner cradling the man, who was much younger than her and died of terrible wounds taken in battle. The woman wears a gown of woolen scarlet, embroidered velvet slippers worth 50 gp and a silver tiara worth 100 gp. The man wears the costume of a wealthy forester and holds in his right hand a broken long sword (once a magical +2 weapon). Upon entering the freezer, a groaning spirit will emerge from the walls of the root cellar and attempt to destroy the intruders.

1705. Amidst the overarching oaks and fecund ferns of the forest, a small mound of earth has been raised and topped by a small wooden idol. The idol looks very old and weathered, the wood cracked and only a few particles of paint still adhering. The idol depicts a woman of earthy beauty, its breasts swollen, belly full, hips round and face regal. Druids, even neophyte druids, will recognize this as a depiction of the one true Goddess behind all mortal conceptions of feminine divinity, and their prayers and offerings (and those of their comrades) will result in each receiving the effects of the Bless spell for one week. Offensive actions directed at the simple idol curse the druid and her friends increase the chance of wandering monster encounters by +2 (i.e. usually to 1-4 on 1d6).

1726. The banks of the river here are coated with run-off from the surrounding farms and villas. Encounters with effluvial grubs, nasty worm-like creatures who burrow and feed on human and animal waste, occur here on a roll of 1-3 on 1d6.

1808. The remnants of a Nomoan road can be spied here, forming a small ridge among the trees and underbrush. The road is mostly overgrown, but still allows fast passage through the woods. It once extended all the way to the mineral springs in [1816]. A particularly large oak alongside the road is home to a flirtatious hamadryad who will appear to benevolent looking adventurers and invite them to dine with her. They will find that a wide stump behind the oak has been set with a fresh linen cloth, plates of silver and a meal of venison steaks and berry wine. The dryad, Salena by name, will quiz the adventurers on the goings on of the wider world, and is a fine hostess. Should the adventurers return her kindness, she will send them on thair way with a sack of goodies (treat as one week of iron rations). Should they prove violent, they will be set upon by a gang of buckawn robbers hidden nearby and poised to strike.

1821. A tribe of skunk goblins has built a large stilt village here. The tribe numbers 125 warriors, 150 females and 200 children. The skunk goblin king is Glickwick, who is advised by Wullug the vizier. The tribe’s warriors go into battle mounted on giant killer frogs, making them a force to be reckoned with.

Art by Dragos Stanculescu from his gallery at Elfwood.
Posted by John Matthew Stater at 10:35 PM