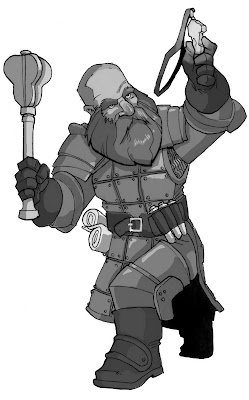 Six more delightful things to see and/or do in Western Venatia.

Also, since I have your attention, a few bits of NOD news:

- PARS FORTUNA is set to be published in one week. There will be a basic version of the game as a free PDF and a complete version for sale via Lulu.com. I'm waiting on one piece of art, right now, and have a few bits of formatting to finish up. PARS FORTUNA will contain 12 new races/race-classes, a new way to handle weapons and armor (nothing earth shattering), simplified encumbrance, new initiative rules, new magic system with 126 different spells, guides on designing campaigns and dungeons - both for sandbox/exploration type games and plot driven games, 147 new monsters, a sample level 1 dungeon, a sample sandbox and 120 new magic items. Whew! The basic version will have 4 of the races, the spells level 1 to 3, about 48 of the magic items and a bunch of the lower level monsters. Can't wait to get this one off my plate.

Oh - and what do you think about STAR FORTUNA as a sci-fi version?

- NOD #6 is in the works - probably will be published early December. This will be a free download to celebrate the holidays. I plan on going free downloads next year and then selling hard copies on Lulu. I think I can make up the lost revenue with advertising - rates will be affordable and the circulation on #1 stands at close to 700 units.

- My first Hexcrawl Classic will soon be available via Frog God Games. I'm writing the second one now and should do about 8 or 10 of the things in all. Exciting stuff for me, and hopefully people will find them useful. I'm especially excited that they will eventually be converted into the Pathfinder format, opening a new audience for sandbox-style play.

- Mystery Men! was funded and I'm now working with Joel Carroll to get our illustrations completed. I'm going to put scads of time into the MM! rules once PARS FORTUNA and NOD #6 are put to bed.

And that's the news from NOD. Now on to our regularly scheduled geekery ...

0913. A tattered cloak hangs on the branch of a tree. The face of a grimacing ogre is embroidered into the back of the cloak. In the presence of ogres or giants, the wearer of the cloak must pass a saving throw or fight alongside them against his comrades or risk the cloak making a choking attack each round as a 4 HD monster dealing 1d8 points of damage.

1616. A female owlbear and her three cubs live here in a dank cave. The cave opens out on a small gully that turns into quite a large pond when it has rained. The gully is surrounded by scrub oak and blueberry bushes. The owlbears look like a combination of great horned owls and black bears. When the female is in season, encounters with males occur on the roll of 1-4 on 1d6.

1631. There is a geyser here in a large, stony clearing surrounded by a “fence” of massive boulders. Most dwarfs can identify the work as coming from hill giants. Within this compound there is a shallow pool of hot water and mineral salts and the geyser, which erupts every 1d4+3 turns. Folk caught in the gout of super hot water suffer 3d6 points of scalding damage (half that with a successful saving throw) and more-over have their movement rate cut in half from the burns that cover their body for 2d4 days.

A cursory examination will reveal spikes hammered into the walls of the cavity from which the water springs. The cavity is safe, though very steamy, if the water is not exploding, and grants access to a complex of limestone caves filled with slippery, sucking mud to a depth of 1 to 3 feet. Movement through the mud caverns is at a rate of 3, and fighting in the mud forces folk to pass a save every time they miss an attack or fall into the sticky stuff.

Lurking in the system of muddy caves is a thessalhyrdra that the region’s giants, goblins and kobolds call Yiquartho, which roughly translates as the “Daughter of Heaven’s Whore”. Yiquartho receives sacrifices of gnomes and adventurers on an irregular basis from the evil folk of the woods, and will quickly pick up the scent of new arrivals. The creature’s treasure is scattered through the cavern system beneath the thick layer of mud.

1642. Giant manta rays, silvery blue in color, choke the sea lanes here by day, and at night leave the water to soar through the skies. By day or night, encounters with the beasts occur on a roll of 1-4 on 1d6 in this hex, with 1d6 appearing.

1707. The River Dubglas in this hex plunges down a waterfall. Stretched across the falls are the remnants of a rope bridge. The bridge now consists of a single length of thick rope with the remaining ropes now suspended from it over the maelstrom. The river is not fordable further up river, for it is astoundingly deep, being a primordial gorge that once supported a dark civilization of ophidians. The river is 40 feet wide at this point, and crossing using the rope requires four strength checks (use whatever method you favor, or use saving throws) to avoid falling. A fall plunges one 10 feet down into the river and then over the 30-ft high falls for 6d6 points of damage.

1817. A tall hill of gray stone dominates the landscape. It is topped with several menhirs that jut out at odd angles. An ancient vampiric chief of the Magog is interred within this hill along with a bodyguard of wights. The tomb is accessible from the top of the hill via a small opening near the base of a menhir. One must wriggle through the opening to reach an ante-chamber ringed with menhirs carved with undulating, swirling patterns that cause nausea when stared at for too long. Secret doors from this chamber give access to the deeper recesses of the tomb. Wandering monsters in the barrow include mites, molds, wights and zombies. At the heart of the complex is the tomb of the vampiric chief, kept in a deep slumber in a coffin of silver in the middle of a pool of holy water.