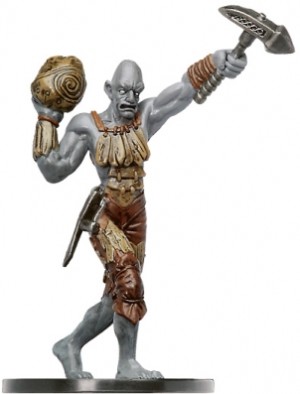 45.15 Stone Giants: A tribe of stone giants is in the process of constructing a giant-sized motte-and-bailey castle. The giants carry large axes, with which they fell the tallest, thickest trees in the forest. So far, they have completed the moat and mound and the palisaded bailey (or courtyard). The bailey contains a barn for their elephants, a lodge, smithy, storehouse, stable and chapel. The higher stronghold is about one third complete.

The giants keep two elephants for pack animals and three cave bears for guard animals and pets. The giants include three brothers, four women and two children. The men have grey skin and long faces with chiseled features. The women, like all female giants, are strikingly beautiful. They are capable of altering their size at will to the size of a human, and can cast spells as 4th level druids.

46.36 Strange Bordello: Travelers through these wooded highlands might come across an odd building constructed of pale blonde wood. The building has a domed roof and double doors composed of a lattice. Within, one finds a central chamber with a great hearth and roaring fire surrounded by silk pillows. Chimes hang from the ceiling and produce discordant tones that make people prone to suggestion (-2 to save).

There are three doors in this central chamber. From one of these doors, a succubus will emerge in human form, in a guise particularly enticing to one of the male members of the party. She will offer the adventurers rest for the night in her roadhouse, leading them to one of the three chambers where they will find clean clothes (in their size), enticing victuals and flagons of spiced wine. Once within one of these chambers, the adventurers will find themselves unable to escape until the dawn.

The character that has been singled out by the succubus will, of course, be invited to remain in the main chamber, where she will attempt to seduce them and steal away at least one of their levels.

The next morning, adventurers will awake to find them-selves in the same building, but the door to the outside opens onto a hellish labyrinth of red, burning stone, where the lucky adventurer who slept with the succubus is now hunted by her in the form of a hellcat. The succubus, Zamira, is a strange sort of lycanthrope who prefers to eat her mates. If killed, the succubus fades away and is replaced by a locked bronze chest containing [oh, wouldn't you like to know!]

48.02 Leather Sack: A trampled leather sack marks the location of a buried treasure. About three feet beneath the earth there is a wooden box containing 45 coins of blackened iron fashioned by dwarfs. They bear the likeness of Djorval, an ancient king of the western dwarfs, on one side and the likeness of a constrictor snake on the other. The coins are worth about 7 sp on the open market, but might draw as much as 500 gp from a dwarf collector.
Posted by John Matthew Stater at 6:24 PM