Fanfare for a Death Scene 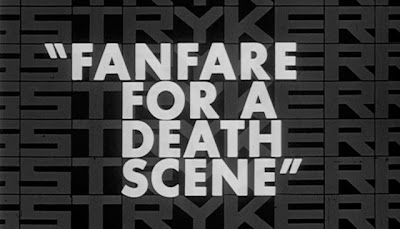 When I drive, I typically listen to the radio more than to CD's. This drives my wife nuts, because I'm a rapid channel-changer - I don't settle for songs I don't like.

"Because," I explain for the thousandth time, "I like to be surprised."

If I don't listen to random stuff, I don't discover new things to love. It's the same reason I like the "view similar titles" function on Netflix - you never know what you'll find, and often that new thing you discover to love is a new old thing. Enter Fanfare for a Death Scene.

I've been on a Charlie Chan kick lately - Sidney Toler's Chan, to be precise - and through that I discovered Fanfare.

Fanfare for a Death Scene is a spy flick from 1964 starring Richard Egan. I put it on my queue and almost didn't watch it, but one night the wife and daughter were at her drama practice, and decided to give it a whirl.

The film opens with a shot of a sanitarium at night. The camera sweeps in through the bars of the front gate in a shot that reminded me of a Tim Burton film, and then we sweep through the halls of the sanitarium, where all the doctors and nurses are slumped over dead, shocked looks on their faces. After this bit, I felt certain that Burton had seen this film - I was getting a Burton's Batman vibe. The shot then moves to the exterior, where two men are sitting in a car. They suddenly see a Burgess Meredith burst through the hedges - okay, he wasn't playing himself, but still, Burgess Meredith is always a good sign. The man sees the fellows in the car, pulls out a trumpet, and then begins playing it. The men in the car stare at him, incredulous, and then turn on their lights. When the lights hit the trumpet player, he pulls out a gun and begins firing. The lights are knocked out, one of the men is hit, and he sends the other off to deliver the news that Bannerman had escaped!

If this sounds nuts, it is, and it defines the wonder of this movie. It's like a '60s Batman episode without the Dynamic Duo. Meredith plays a crazy scientist and amateur-trumpeter who devises a deadly poison. Telly Savalas plays the Mongolian khan who controls shadow governments all over the world, who wants the poison for some nefarious scheme. Viveca Lindfors (I fell in love with her in The Adventures of Don Juan with Errol Flynn - another must-see) is his Mongolian princess, while Tina Louise (Ginger from Gilligan's Island) plays one of his assassins (in a suggestive scene you might be surprised to find on early 60's television).

This whole bizarre crew is being hunted by our hero, Stryker, a secret agent and industrialist, who is assisted by agents of the Probational Bureau of Investigation (okay, I think that's what it was called - I watched it about two weeks ago). Honestly - seek out the film on Netflix if you can - words can't quite describe how much I liked this movie. Weird without being too weird - it reminded me of a typically gonzo role playing game session, where everyone is having fun and nobody cares how goofy things get.

The real reason to watch this, though, is the inspiration it can provide for an espionage game, especially a Cold War game. Nobody believes Stryker when he tells them that the USA has little to fear from Russia and China - the real deal are the Mongolians and their shadow governments and assassins. Tina Louise makes an awesome femme fatale, Savalas an excellent Yellow Peril, and one can imagine the adventures of agents of the PBI as they fight these fellows in games that could have been inspired by a weird, slightly campy '60's spy show that never existed.
Posted by John Matthew Stater at 9:59 PM