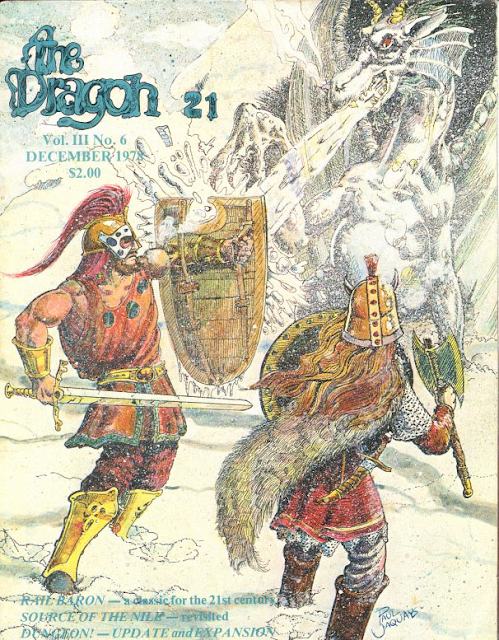 Just imagine all the spiffy Ronco products people were unwrapping on Christmas day in 1978! A few folks might have also been perusing the December 1978 Dragon magazine while they were waiting for Christmas lunch or dinner. Let's see what it included ... 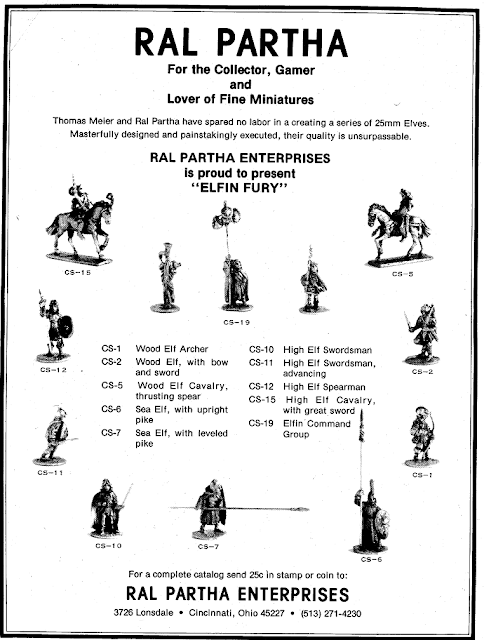 First up, we have a groovy little advert from Ral Partha that would make a good elven army list or encounter list. Let's make it random ...

First article this issue is a revisit of the Search for the Nile game. This is basically a response to the article in the last issue of The Dragon by the games creator.

Okay - have to share this next ad with everybody ... 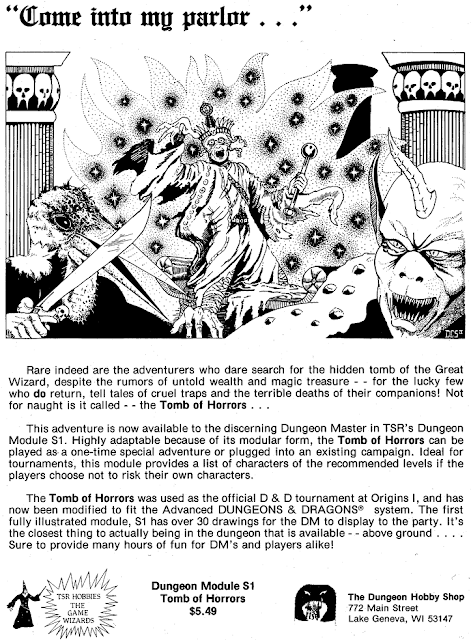 Next up, we have a neat little table of titles for powerful NPCs by Brian Blume. This one works like the old menus at Chinese restaurants - choose one bit from column 1, one from column 2, etc. Here are a couple examples:

The Lord Protector, His Most Distinguished Illustriousness, The Crown Prince Bob, the Incomparable Slaughterer of Dragons

The Guildmaster, Her All Triumphant Laduyship, Lady Cassandra, The Terrible Scythe of Honor

Kinda groovy - worth checking out. I'll probably turn it into a random table and use it for Nod now and again.

Willie Callison now presents a Cure for the "Same-Old-Monster" Blues. Every long-time DM has gone through this. Mr. Callison's suggestion is to look at the world around you and draw inspiration from nature. The giant snake, for example, can be described as any real species of snake - different types of attacks, different color patterns, etc. You get the idea.

Callison also provides the next article - Inflation in D&D. In 1978, inflation would have been foremost on people's minds, and Willie complains about the lack of realism inherent in the D&D economy - i.e. too many gold pieces floating around. Unfortunately, he doesn't really give any solutions to the problem. So, kind of a pointless article.

Prophet Proofing (or how to counter foretelling spells) by David Schroeder attempts to throw a monkey wrench into spells like clairvoyance, clairaudience, wizard eye, ESP and x-ray vision. I'm generally not a fan of ideas on how to screw up powers that players should rightly be able to exercise with the characters. I mean, a fighter with a high strength and two-handed sword sure does kill lots of orcs - shouldn't there be a way to screw that up? Sneaky tricks are a good thing in D&D - keeps the players on their toes - but at the same time, the clever use of spells to overcome obstacles is one of the points of the game.

Sensible Sorcery is an article by Ronald Pehr that explores ways to make researching spells more difficult for magic-users. I think I'm detecting a theme in this article.

Robert Wagner (no, probably not him) now delivers a Boot Hill Encounter Chart. The chart is for town encounters, and is divided into two parts - Town till 8 p.m. and Town after 8 p.m. The early chart gives a 1 in 6 chance of an encounter, while the late chart gives a 2 in 6 chance. Early encounters include pickpockets, various job offers (a very good idea!), being shot at by 1 or 2 people, being mugged by 1 or 2 people, being falsely arrested or have 1 or 2 deputies after you. The late encounters include jealous husbands, being challenged to a gun fight, seeing a bank robbery, more job offers and being arrested by a U. S. Marshall (maybe this guy!). It's a very good chart, and easily adaptable to a fantasy game or one set later than the Old West period.

Rod Stevens delivers Encounters with Personality. Here, he provides a few ideas on giving monsters and NPCs a bit of history and personality for encounters. Did DM's actually not do this back in the day? Perhaps - old D&D had a few elements of wargame/boardgame to it back in the day, but articles like this show the progression to a more story-based game. A couple examples:

1. BLARG: Ftr. Cha/Evil. Hobgoblin. Blarg hates everything but ogres. These he emulates but they hate him.

8. CLARENCE LINDIR: Ftr. Law/Good. Human. He is a constable who is always accompanied by 11 other constables. He will do anything to make an arrest including arresting jaywalkers, people with water in wine skins, or anything else he can think of. He often makes up absurd charges. When in court he will then charge resisting arrest if the party didn’t come peacefully. Of the hundreds of arrests he has made, he has only gotten 2 convictions. The townspeople pointedly ignore him and call him “Clarence the Clown” behind his back.

Next come the game reviews. Olympica is set in 2206, where a human colony on Mars is being conquered by a group mind called "The Web" (prescient in a way, huh?). One player controls the assault group being sent by the U. N., while the other player defends the Web generator from the assault.

Don Turnbull of Cambridge, England presents a section of his Greenlands Dungeon - The Hall of Mystery. It's quite a long description, but it involves riddles (sort of), mirrors (one a mirror of opposition, the other of life trapping containing a succubus) and a host of monsters in rooms. I will share the map ... 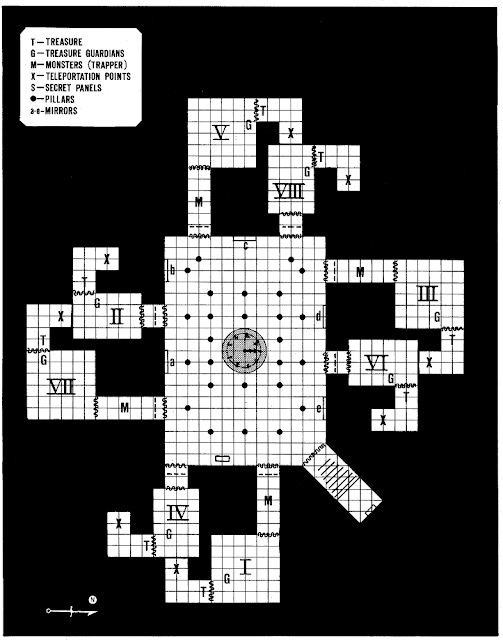 Gary Gygax pops in next with a strategy guide for Rail Baron. I've heard good things about this game (one wonders if it could have been used in concert with Boot Hill), but I've never played it. Since I haven't played it, I won't chime in on how good a guide it is, but it does look as though it's quite thorough. In fact, I think it might be the longest article in the magazine.

A couple more game reviews follow. King Arthur's Knights, which reviewer S. List describes as being similar to TSR's DUNGEON. Players choose to be a knight errant, knight at arms or great knight, which increasing levels of power and obligations, as well as tougher victory conditions. The map was apparently gorgeous, the rules book 16 pages long and there were 11 decks of small cards. There are several Magic Places on the board, and on each one places a magic treasure and magic guardian.

T. Watson then has a review of Tolkien's Silmarillon. Watson describes it as the bible of Middle Earth, with the Valar as the angels, Melkor/Morgoth as Lucifer and the elves as the chosen people. Watson seems to like it, despite it being long and dry, but also seems to indicate that it's for folks who really want to know more about the imaginary Middle Earth.

In James Ward's Monty Strikes Back, we get another installment of gonzo dungeoneering done right. Here's a sample:

"The three ancient white dragons guarding the door were no problem. It was just a matter of running in the chamber hasted and invisible and throwing three hold monsters at things. They didn’t have any treasure, they were just there to slow us down a bit. As we walked through the door ‘Monty gave his “evil” chuckle (which always meant we were in big trouble) and we were told that we were sliding down a sheet of glare ice. We wound up pinioned against a mass of ice spears and everybody but Freddie had taken damage. He then thought it would be a great idea to use his flaming power to melt the spears away. Ernie and I, knowing the horrors Monty could think up, tried to stop him but it was too late. We were hit from above by partially melted ice stalactites and again Freddie was the only one unhurt."

This was my point about D&D once being something like a wargame/boardgame. The fun was in moving around the pieces, not telling their life stories.

And that's it for December. The reviews were interesting, a few of the articles useful, but honestly not among the best issues I've read.