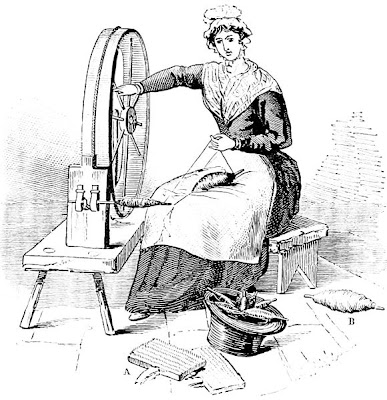 Why magical strings? Because the idea popped into my head the other day while I was taking a walk. Enjoy ...

Thread of Fate: This special thread is made from entwining gold and silver thread with hair plucked from the head of a hag. When sewn into clothing using a gold needle, the thread permits the wearer of that garment to once attempt to escape death. When faced with any event that would cause their death (hit point damage, a failed saving throw, etc.), the adventurer can ignore the event – i.e. the attack somehow misses, the saving throw is a success, etc. Once death has been escaped, the thread loses its magic unless the garment is subsequently washed in a potion of restoration.

Thread of Guiding: This magical thread, when its spool is dropped to the ground, traces the path of the person who dropped it, rolling along until it reaches its maximum distance of 300 feet. It can be re-rolled onto its spool while one follows it, but will not magically re-roll itself.

Cat’s Cradle: This is a magical string with an amethyst gleam that can be turned into a cat’s cradle by one deft with his hands (Reflex save). While held before a person, it can catch any spell thrown at the person (force effects included, but not energy or physical effects like fire or stones). The magical energies in the thread can then be flung back at the caster (and only the caster) the next round. If these energies are not so thrown within 3 rounds, they ignite the string, which deals 1d4 points of the damage to the holder of the cat’s cradle per spell level.
Obviously, while holding a cat’s cradle, one cannot wield a weapon or shield. Monks can still attack, but since they may only use their legs they suffer a -2 penalty to attack.

Memory Thread: Memory thread is a saffron colored bit of string. When tied to one’s finger, it permits them to remember one thing perfectly without fail. Magic-users can use memory string to remember a single spell of up to 2nd level, essentially gaining an extra spell slot. If the string is removed or destroyed, the memory is lost (though one could still conceivably remember it in the normal, non-magical way).

Spool of Recording: This is a spool of mahogany, well worn, without any thread. When held before a person and the command word (“Victrola”) is uttered, it causes anything said before it by a single person to take the form of a silver thread which is pulled from their mouth and reeled onto the spool. The sound of what the person said is converted into the silver string, so no sound is heard. Spells uttered in this way are disrupted.

If this string is pulled through the eye of a crystal needle, the sound can be replayed. This can only be done once. If the sound is a spell, there is a chance it will go off, based on the level of the spell, with a target chosen by the holder of the spool.

A string can also be destroyed with fire if the spool’s owner does not wish to hear it.

String Snapper: A string snapper is a magical amulet of bronze embossed with the image of scissors. By rubbing the amulet and then snapping her fingers, the owner can cause all strings within 30 feet to potentially snap. This includes the strings of instruments (though not magical instruments), bowstrings (though not of magical bows) and other taught strings. The strings in question receive a saving throw to resist the effect. Each time the amulet is used, there is a 1 in 6 chance that it dissipates into yellow smoke that smells of sulfur.

Kazoo of Power: This silver kazoo, when blown, produces no noise but causes all strings on bows or musical instruments to begin vibrating. This vibration renders an item useless for its owner, and also sets up a throbbing harmonic that causes 1 point of sonic damage per round to anyone within 10 feet of the item (cumulative). Magical items receive a saving throw to resist the effect of the kazoo of power.

Quantum Lens: A quantum lens looks like a monocle with a silvery sheen. When placed over the eye, it allows one to glimpse quantum strings that crisscross through reality. The lens also allows one to pluck these strings (or at least attempt to) to cause changes in the environment around them. The attempt requires on to make a special task check that is a Will save modified by intelligence (if one is a magic-user, sorcerer or bard) or otherwise made as if one had a knack at screwing with reality (also modified by intelligence). Different quantum effects carry with them different penalties to the task check. In any event, only one such event can be produced per day without attracting the attention of an astral deva, who will attempt to seize the quantum lens from the character with extreme prejudice.

Silver Scissors: This is a pair of scissors made from alchemical silver and engraved with various glyphs and words of power. Silver scissors can be used to cut astral threads, those threads that connect a person on one plane with his material self on another after he has traveled through the astral plane. Astral creatures can also be affected by the scissors, the cutting of the thread forcing them back into he astral plane for 24 hours.
Finding a thread is the hard part, of course. Threads usually connect to a creature’s back, and random attacks at a person’s back can be made with the scissors as though attacking Armor Class 22. If one can discern astral threads in some manner, they may attack them as though attacking Armor Class 12. Damage need not be rolled – a successful attack with the scissors cuts the thread.

Posted by John Matthew Stater at 9:29 AM