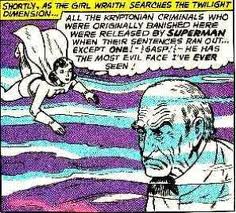 Thought up a few new bits of super science for Space Princess. Enjoy ...

Phantom tech is concerned with insubstantiability. It is designed to separate an object's molecules just enough to allow it to pass through another object, which is also made insubstantial. In the process, molecules from these two objects do not mix with one another, but rather they maintain integrity (well, mostly - long term use can prove hazardous to one's health).

Phantom Suit (DC 25) – Phantom tech suits cover the entire body and are skin tight. They are usually a dull gray or black in color and covered with slightly luminous circuitry. One can see and hear through the head covering, though not terribly well. When activated, the suit creates a field of ethereality around and through the suit, allowing a person to become ethereal and walk through solid objects.

Phantom Bullets (DC 20) – Phantom bullets can be fired from needle guns. Each bullet is imprinted with phantom-tech circuitry. They are designed, after being fired, to become ethereal until they have passed through at least one inch of solid material. This allows them to ignore armor (even natural armor) and to inflict +1d4 points of damage when they become solid within a creature's body

Phantom Ray Goggles (DC 20) – These goggles project a conical ray that separates the molecules of a solid substance, allowing the person wearing the goggles to peer through it

Phantom Ray Trap (DC 25) – These traps look like flat, circular, metal objects about 3 feet in diameter. When laid on the ground, they project a conical phantom tech ray when they are trod upon. This causes the person who trods on them to become ethereal and shift into the Phantom Dimension (fantasy characters know it as the Ethereal Plane), where they are trapped. The process takes one minute, giving scientists time to deactivate the device before the person is trapped.

Etherscope (DC 20) – An etherscope looks like a hemispherical but of metal with a glass screen, with all sorts of dials and antennae projecting from it. It permits one to look into the Phantom Dimension from normal space.