Long time readers of this blog know that I like weird or unique classes. Equipped with this blog, you could have a party consisting of a 5th level master blaster, 4th level unicorn, 4th level traveler (think Doctor Who) and 5th level cleric (well, you always need a cleric, right?).

This class actually originated as me thinking "Metatron would be an awesome level title - I wonder what of?" 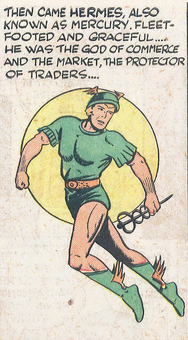 Runners are men and women (or males and females) who specialize in running. Most serve as long-distance messengers or in military organizations as couriers delivering orders and reports back to headquarters. In dungeons, they are capable scouts and middling warriors, and at high levels they begin to emulate the very messengers of the gods.

Requirements: Runners must have Constitution scores of 13 or higher

Armor Allowed: No armor is allowed, but runners can use bucklers

Weapons Allowed: Runners can use light and medium melee and ranged weapons

First level runners (messengers) are known for their quickness and their utility as messengers. They gain Armor Class bonuses as monks (same progression) and can make Will saves (modified by intelligence) to understand unknown languages and Will saves (modified by their charisma) to make themselves understood to those who do not speak the same language.

A third level runner (courier) gains the Endurance feat for free (even if you do not usually use feats in your game).

A fourth level runner (herald) receives a +1 bonus to all reaction checks, provided they are not acting in an offensive or aggressive manner.

A sixth level runner (emissary) can calm emotions (as the spell) by speaking, provided he is not acting in an offensive or aggressive manner. If those he is trying to calm do not speak his language, he must use his ability (see above) to make them understand, and even then they receive a +1 bonus to save vs. the calm emotions effect. Creatures with no language cannot be calmed.

An eighth level runner (mercurial) becomes superhumanly fast. They can now run at six times their normal land speed. For one round plus one round per Constitution bonus per day they can use the haste or blur spell on themselves.

In addition, an eighth level runner can speak with dead once per day.

A twelfth level runner (psychopomp) can move so quickly that they can, when moving at top speed, plane shift once per day into another dimension, and once per day back to their home dimension. 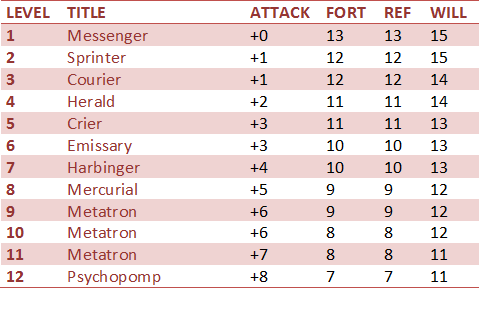