Over the course of the daily annoyances that accompany being a research manager in the commercial real estate business I had a moment where I needed to decompress. For me, this involved listening to some classical music on Spotify and entering the following phase into Google: "I want to see something beautiful."

Among the webpages returned was a board on Pinterest aptly titled "Beautiful Places". Below, is the panoply of images that greeted me when I clicked on the link ... 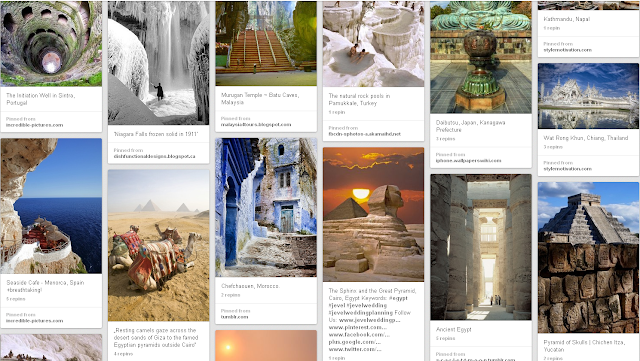 Now, I'm actually a pretty early adopter on Pinterest - I'm at least as much a visual person as I am a word person (literal person?), so it works well for me as a source of inspiration and a place to post images I might want to look at later. What I hadn't considered was how much a single board like this could do for you when you need to cook up a quick region for a campaign you're working on.

Consider the image above. Now, we don't have to look at it in a geographic way, but we certainly could. Let's start with the Moroccan town - what an evocative home base for the player characters. Ancient brickwork, colorful arches, narrow streets and alleys. Bright and beautiful, but plenty of room for a network of thieves and assassins to operate. To the east and west we have deserts. The western deserts support camel caravans, linking the town to the beautiful, rocky coast. The eastern deserts hold ancient monuments and temples - places to explore and loot. Further to the east are the jungles and their secrets. To the north there is a great temple in a cave of bats - could be a temple of elemental earth. Maybe those frozen waterfalls are deep underground and reachable through the partially subterranean temple - what wonders are frozen in the ice? Far to the northwest there is dungeon - a sort of pit - that probes deep into the earth. You could enter from the surface, or perhaps by following a slowly thawing river that connects to those deep, frozen waterfalls. Near the earth temple are the rock pools, ruled over by bikini-clad elves (hey, why not?). In the northeastern jungles there is a fabled city with gleaming spires inhabited either by the undead or the fey - the tales are unclear on this point - and near it a great idol of Law (or Neutrality) protected by a brotherhood of monks (or clerics, if you're super old school).

You could also use this as-is as a sort of "pincrawl", representing the players as a game piece and letting them move about from pin to pin (maybe a dice roll, influenced by the presence of a ranger, horses, etc.) could determine what challenges they face moving from one pin to the other (monster attack, getting lost, extreme weather conditions, etc.). They'll have an idea of what each region holds, but there are many things they won't find out until they get there.

I imagine there are many more boards on Pinterest that could provide equal amounts of inspiration, for games set in almost any time period. Check it out!
Posted by John Matthew Stater at 9:07 AM