I'm beginning the process of revising Blood & Treasure for release next year. This is primarily a task of getting in the errata, looking for things I and others might have missed, and refreshing the design. I want to make the books more readable, and thus easier to use. I'm also considering new cover art for the books - commissioned cover art. If you have suggestions for artists you would like to see grace the covers, let me know in the comments.

Revisions are also a good time to examine some premises - are there things that were not wrong, per se, but which could be better. To that end, I was looking at saving throws the other day, and whether B&T saving throws, which are based on the values in 3rd edition, are easier or harder than saving throws in older editions.

I did a quick search online this morning and found the 2nd edition AD&D saving throw tables, so I'm using them for this analysis. I figured that Save vs. Paralyzation, Poison & Death Magic mapped pretty well to Fortitude in B&T. Save vs. Breath Weapon maps pretty well to Reflexes, and Spells to Will. What I didn't notice until now (it's been a while since I looked at 2nd edition, and perhaps the values are the same in 1st as well), is that Save vs. Wands, Staves and Rods is just Save vs. Spells, but 1 point easier. I'll incorporate that into the revised B&T for sure (+1 bonus to save vs. spells cast from wands, staves and rods).

Anyhow - here is how they shaped up:

Clerics (or Priests, in 2E) weren't that great against spells, which was changed in 3E. People often complained about the clerics being a bit too good in 3E, so perhaps they shouldn't have made that change. That aside, the other categories end up pretty close at 20th level, but PPDM is much better than FORT for most of the cleric's career. Perhaps the worse FORT save in 3E makes up for the better WILL save.

The fighters have an easier time of it in 3E at early levels, and a worse time of it at higher levels in terms of REF and WILL saves.

Magic-users are pretty close on PPDM vs. FORT and BW vs. REF. SP/WILL differ somewhat, with a marked improvement in 3E at very high levels.

Thieves in 2E were better vs. PPDM than BW, which was flipped in 3E. Save vs. Spells / WILL is pretty close.

So, between those editions, there were changes to be sure, but the overall ranges from 15 to 8 for poor saving throws and 13 to 3 for good saving throws, are pretty close.

My temptation is to do hybrids of these in the revised B&T, so they're not quite so formulaic. Something like: 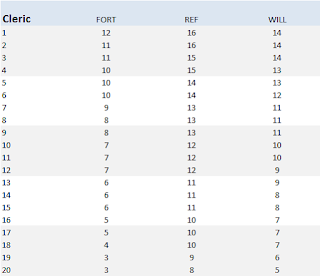 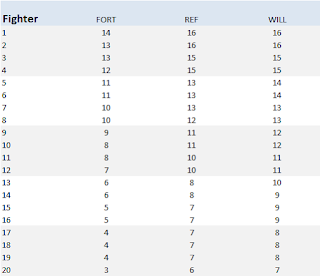 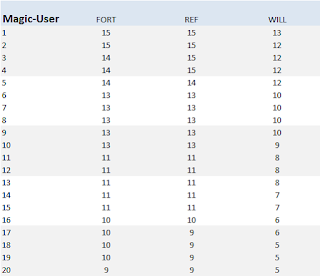 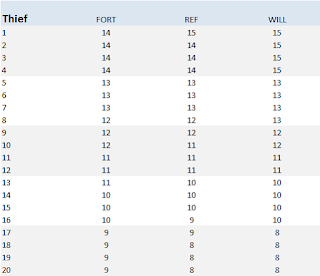 Posted by John Matthew Stater at 10:29 AM