They Sup on Your Dreams [New Monster] 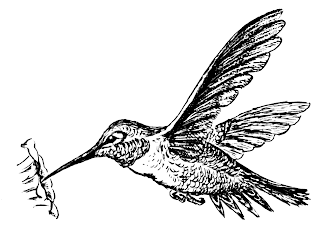 They are tiny, with long, beak-like snouts and beady eyes that sometimes strike you as cruel or callous, other times as curious. They have hummingbird wings where a man’s arms would be, and lithe bodies in pleasant, subdued colors – dusky rose, marmalade, the blue-grey of a threatening storm.

They appear at night, and settle down on a person to sup on the nectar of their fitful dreams. Dreams of isolation or rejection please them most; night terrors sate them quickly, but leave them unsatisfied. They hover and stare, and touch their snouts to the person’s temples or forehead, remaining for a few minutes. The dreamer has the best rest of his life; if he was nursing a psychic wound (such as damage to a mental ability score), he heals at twice the normal rate for the hummingbird man’s presence.

If the hummingbird man is threatened by one who knows not what it is or by one who cherishes his dreams, fair or foul, the beast flits back and disgorges nightmares from its snout. These nightmares are illusions, but hard to disbelieve (-2 to save). They usually take one of the following forms:

1 Black tentacles (solidifying from black mists)
2 Phantasmal killer (often a wild-eyed version of one's close relatives/lovers/self)
3 Shapechange (into something one would not want to be)
4 Flesh to stone (usually a slow transitions, from feet to head)
5 Insect plague (but not always insects)

The victim has a chance to disbelieve each round, but only if the player says they disbelieve. The saving throw begins at -2, but the penalty increases by -1 each round as they are drawn further into the nightmare. The nightmare, thankfully, ends after 6 rounds, by which time the hummingbird man has fled to dine on blacker psyches.
Posted by John Matthew Stater at 8:37 AM