I was going to offer a no-prize to whoever could identify from whence these fellow come, but then I decided to use the art down below, which should kill any mystery to their origin. These guys are pretty tough, but I also tried to keep them simple.

Black mystics are men (always men) who have entered into a dark pact with the nether forces in a bid for earthly power. To become a black mystic, they must have all the goodness in their souls extracted. This goodness, or higher soul, takes the form of a golden sphere, and is kept imprisoned by the black mystics in some form of mystic receptacle or iron-bound box.

Black mystics have amazing reflexes, catching or slapping away normal missiles on a roll of 1-4 on 1d6. They make no sound when they move, and have an 85% chance to hide in shadows. The sight of their twisted bodies forces creatures with 2 HD or fewer to pass a saving throw or be stunned with disbelief for 1d6 rounds.

Black masters rule the black mystics. They have a 95% chance to hide in shadows, and can shapechange twice per day into giant constrictors, giant vultures (use stats for giant eagle) or giant scorpions.

If a black mystic or black master's higher soul is released from its captivity, it vaults into the celestial heavens and leaves the mystic or master dead. Damage against the soul's receptacle causes stuns mystics and masters if they fail a saving throw.

* In Blood & Treasure Second Edition, magic resistance is not a percentage. Rather, it requires the spell caster to roll higher than the creature’s HD+10 with 1d20 + the spellcaster’s level. If you want to use a percentage, I'd go with 15% for the mystics and 30% for the masters. 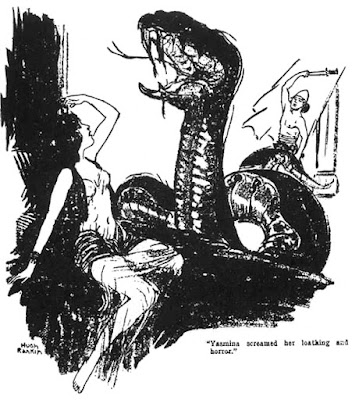