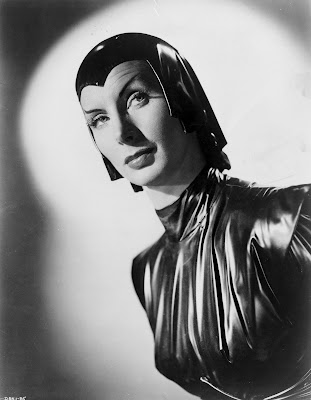 Here are a few sample monsters - "aliens", in fact, from the Space Princess game. The game is coming along pretty well - just a bit more writing to do and then some artwork and she's ready for testing!

Devil Girl
Devil girls come from a female dominated society with a declining male population. Devil girls are undeniably attractive, but merciless in their treatment of others. They wear uniforms of a black, vinyl-like substance that is a surprisingly good armor. Devil girls suffer only half damage from cold, electricity and fire and they can blanket a 60-ft radius area around themselves in complete darkness once per day for 10 minutes. Devil girls are capable of seeing in this weird darkness, but other creatures are not, giving the devil girls a +5 bonus and the others a -5 penalty to attack.

Space Amazon
Space amazons are women of tremendous strength and dexterity who are sometimes hired as elite guards in a space fortress, or perhaps were captured and subsequently escaped, living as outlaws in the fortress’s myriad tunnels and chambers. Space amazons stand about 8 feet tall and have green skin, white hair, and long antennae. Large groups of space amazons are commanded by a myrmidia. Each myrmidia has a 5% chance of secretly falling in love with a male star warrior and betraying her sisters on his behalf. If spurned by him, her berserk fury is doubled against him.

Trilodite
Trilodites are protoplasmic aliens consisting of a ooze-like interior and a pink, rubbery exterior. Trilodites “stand” about three feet tall, usually on three pseudopods. They often have three additional pseudopods emerging from higher on their bodies that they use as arms. Trilodites can use these pseudopods to manipulate small objects as a human uses hands, and can retract or grow additional pseudopods as they like, though eight seems to be their useful limit. Trilodites have a high sensory awareness, and are thus rarely surprised. Because of their alien structures and minds, they enjoy a +2 bonus on tests to resist psychic powers that attempt to control or influence them. Their elastic forms give them a +2 bonus to DEFENSE to resist attempts to grab or hold them.

Voltan
Voltans are a humanoid species with slightly pointed ears and bald heads covered with peaked ridges. They are quite strong and very intelligent. Some voltans have red skin, while others have blue skin. The red voltans tend towards contemplation and a love of logic, while the blue voltans are emotional, over-bearing and militant. Blue voltans arm themselves with jagged blades and ray guns and wear steel mesh tunics. Red voltans do not wear armor or carry hand weapons, but do use ray guns.