Visit the Bazaar / Preview of Hell 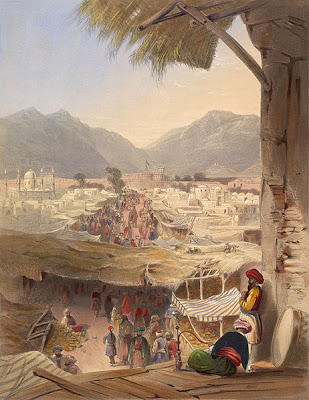 Are you in need of late '80s or very early '90s comic books in readable condition? Maybe some 3rd edition books from WOTC or some spell decks from 2nd edition AD-n-D? Then by golly, you are in luck. I just opened a Bazaar to get rid of this crap these wonderful artifacts from another time.

CLICK HERE and name your price or trade, folks. If I can't shift it here, I'll probably just give them away to a charity shop here in town.

And now that my crass advertising is finished, enjoy a preview of Hell's doorstep (i.e. Ante-Hell), which I'm tentatively calling Nifol ("Darkness") ...

1.91. Temple of Amfelyn: A trail of phosphorescent flagstones leads to a plaza of similar construction in the middle of this tunnel. The plaza measures about 100 feet on each side and has a crypt in its center and four round towers at each corner. These towers and the crypt are carved from polished obsidian. The crypt is square and about eight feet tall, with no obvious entrance. The towers have circular bases and measure about four feet in diameter. They are also eight feet tall. Each tower is really just a stairwell for a narrow, spiral staircase that leads about twenty feet below the tunnel floor to a large cavern littered with the dead bodies of drow. Each drow has had its heart removed with surgical precision, the organ being replaced by an iron sphere.

The crypt has channels carved into the top in an “X” shape with a slight depression at the intersection. These channels extend down the sides and onto the plaza floor. Should a male touch the crypt, the sides become transparent, revealing a female drow interred inside. The woman has the dull, charcoal gray skin of a dead drow, though her form remains lovely. Her eyes are a brilliant violet and their look can dominate any male humanoid (saving throw to negate). When the walls of her crypt become clear, she stirs and attempts to use her gaze, commanding any person so dominated to deliver her the heart of a comrade. The heart must be placed atop the crypt, allowing blood to flow into the tiny channels and down the sides. When filled with blood, these side channels form the sides of a portal, which opens to allow access to the crypt. The female drow, Amfelyn, is a vampire of sorts. She will emerge from crypt and attempt to slay the dominated man, feasting on his heart. If the man is a priest, as the ones below the crypt were, the iron heart grows in their wound and animates them as a huecuva. Otherwise, their body is simply cast into the darkness to feed the oozes. Amfelyn can remain out of her crypt for one year and one day when she feasts on a heart, and then must return to her supernatural slumber.

As mentioned above, the eight bodies below the crypt are all huecuvas. They animate when the crypt is touched, but only interfere if it looks as though the dominated man will fail to slay a victim and open the crypt. The crypt, which measures about 12 feet on either side, contains Amfelyn’s treasure of 1,500 gp, a horn fashioned of white gold (1,000 gp), a Morningstar, a container of salve that grants a +1 bonus to save vs. poisons, a large bottle of green liquid (potion of heroism), a bone wand (10 charges, lightning bolt) and a single agate worth 250 gp.

Posted by John Matthew Stater at 8:42 AM