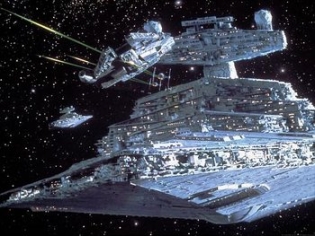 Alternate title - if you're expecting Rient's Fleet Captain, boy are you going to be disappointed!

I'm writing the spaceship combat rules now for Space Princess and thought I'd bounce a few things off of my readers (wow - it feels both cool and pretentious as Hell to say "my readers").

The Basics: Space Princess' spaceship combat rules are designed to do one thing - simulate the rescuers of the "space princess" escaping into light speed from the Dark Lord's minions. That's it. If the game is successful, maybe an expansion could add more to the rules, but for the game, I want to simulate one thing and one thing only to keep it simple.

The Procedure: As it stands, the spaceship combat procedure works as follows:

1 - Maneuver: The player of the character piloting the escape ship make a pilot test to attempt to stay away from the pursuing ships. If he fails, they come closer (and closer means it's easier to hit with weapons), if he succeeds they either stay at the same range or fall behind. There are penalties attached to his roll based on how many pursuers he's trying to dodge, whether there are obstacles to maneuvering (the ground, canyon walls, asteroids) and damage his ship might have taken.

2 - Fire Weapons: Good guys and bad guys fire their weapons. Each hit means a damage roll for the affected ship. These damage rolls are not in terms of "hit points" or "hull points", but rather an actual effect on the ship. The smaller the ship, the more dire a hit is likely to be. The worst forms of damage are hull breach (can suck players out into space, where they die) or complete destruction of the ship. Complete destruction is rare - the pursuers are usually trying to disable your ship and capture you.

3 - After all weapon fire is resolved, the player whose character is in charge of navigation (scientists are the best at this) makes a roll to see if she's calculated the proper formula for light speed. The chances of doing this on the first round are very remote, but the difficulty of the roll is lessened with each failure. This means you don't know how long it will take to jump into light speed (and safety) - should make each such roll dramatic.

So here's where I want to access your brains. I'm thinking about possible damage results on ships. Ships are rated based on Speed (includes maneuverability), Armor, Number of Engines and Different Weapon Systems (laser banks, torpedoes and tractor beams for the dreadnaughts). Here's my list of damage effects so far:

1 - Engine Damage - penalty to speed/maneuvering; once a ship has lost all engines it is dead in space

2 - Computer Damage - maybe hits different systems - damaged Nav-Computer means you cannot jump into light speed until fixed. Weapon Systems Computer might turn off all weaponry until fixed. Maybe the engines can be knocked off line as well. Possible damage to characters from the boards sparking and going up in flame, a'la Star Trek.

3 - Artificial Gravity Lost - this would potentially damage characters on the ship from things floating about (or from them floating about).

4 - Weapon Destroyed - One of the ship's weapon systems is destroyed.

5 - Hull Damage - lowers the ship's Armor rating by one. Probably the best result you can get from damage. Somebody will probably mention force shields here - I'd rather just consider them part of the "armor package" - to keep things simple, if two things essentially serve the same function, I'd rather merge them together.

7 - Ship Destroyed - this would be a "roll again, if comes up again, spaceship destroyed and all aboard killed" - it's old school, so yeah, instant death is a possibility.

All of the results except ship destroyed would be repairable - again, a scientist would be best at this (or maybe somebody invents an engineer class to lend a hand).
Posted by John Matthew Stater at 1:38 PM