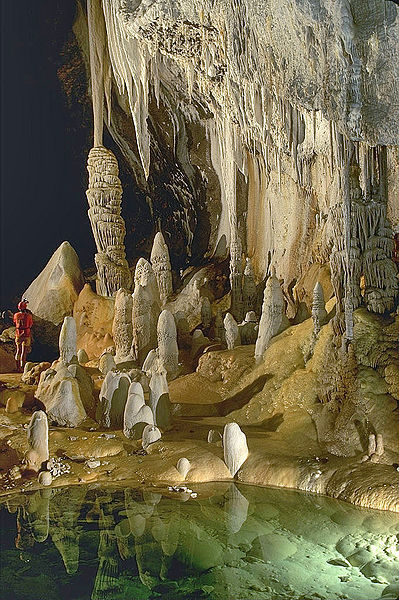 Now that I'm firmly ensconced in writing about the Underworld, it behooved me to put some thought into landscapes deep beneath the surface of the earth. To that end, I dashed out some ideas to work off of - and will probably add to it as I go. Of course, these are fantastic landscapes, so take them with a grain of salt. Maybe they'll be useful to some other world builders out there.

Character of the Walls/Ceiling
- Ledges (wide, narrow, steep, gentle)
- Pocked with cave opening or openings (ground level, high, how many?, uninhabited, abandoned, inhabited by animal life or sentient life?)
- Waterfalls pouring from the walls/ceiling- Lava flowing from the walls/ceiling
- Smooth and hard to climb
- Damp and slimy
- Hot to the touch (lava flows behind them?)
- Carved (art, cliff dwellings, stairs or ladders to caves, mines, rent by claws)
- Glowing (phosphorescent fungus or minerals, radiation, magic)

If you have any bright ideas to add to this list, I'd love to hear them!

Image by Dave Bunnel, found at Wikipedia
Posted by John Matthew Stater at 10:00 AM