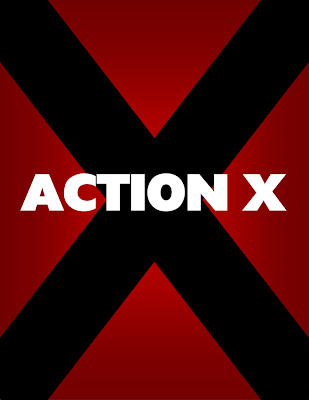 In a nutshell -With Action X, I'm trying to do with the Modern SRD what Blood & Treasure did with the fantasy SRD. The challenge - the SRD has a lot of history behind it - many editions of D&D with all the wonderful nonsense that goes along with it. The Modern SRD does not and, even worse, it's just so damn boring and mechanical. Worse yet - it keeps making my writing boring and mechanical.

So - I bring an appeal to all of the geniuses that read this blog - what are the modern archetypes you'd like to see in a fun role-playing game not set in a fantasy milieu. By "modern", I pretty much mean from Victorian times to today (or beyond into the near hard sci-fi future or even pulp sci-fi future).

I started with numerous classes, then boiled them way down and now I'm left feeling uninspired by them. Now I'm beginning to turn back to my original idea of a dozen classes that really hit the archetypes of modern action/adventure. I can't hit every archetype of course, and new classes can always be added, but I'd like to get a strong core of fun classes that will spark people's imaginations.

Some ideas (some of which are advanced classes in the Modern SRD, but which will need some TLC to make them anything more than collections of dry, boring bonuses to dice rolls) and some ideas for inspiration:

Brute (Mr. T) - hate the name; love Amazon, but that only applies to the ladies

Gunslinger (Lone Ranger, anyone from a John Woo flick)

Hacker (they abound in the news these days)

Martial Artist (Bruce Lee) - the name is so boring, though, but ninja and kung-fu master are too specific

Scientist (Professor from Giligan's Island, Spock) - maybe Brainiac would be a better name

I've thought about throwing in some odd balls as well - Cyborg, Mutant, Vampire - stuff like that. Almost a "race as class" concept for modern gaming.

So - any additional ideas out there? Let me know in the comments. Dangit - I want to make a fun modern RPG!
Posted by John Matthew Stater at 3:34 PM