A Weapon Damage System ... Cause Everything Needs a System! 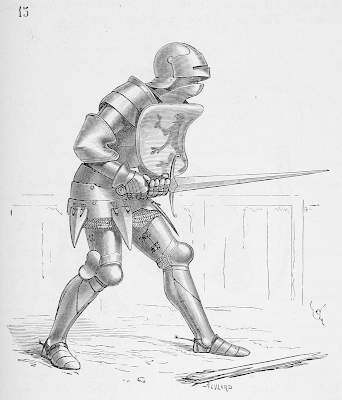 A system? For something as simple as weapon damage? Why?

Blog posts, baby. I need constant validation from you, the reader, and to get it, I have to make stuff up almost every day.

Seriously, though, when I'm writing bits and pieces for games or adventures and come across a weapon that doesn't show up in Blood & Treasure or Swords & Wizardry, I have to eyeball it. What's the weapon like - is it deadlier? Less deadly? Etc. This system works well enough - I'm never one to get hung up on the details when it comes to slaying dragons, but I have thought about doing something a bit more rational.

To start with, we need the most basic weapon known to man ... the fist. Depending on your system, a human fist usually does 1d2 or 1d3 points of damage. For our purposes, we're going to go with 1d2.

We're then going to rate each weapon on its physical characteristics, giving a weapon points based on these characteristics. Each point increases the damage of the weapon by one step. The damage steps are as follows:

Let's now take on the physical characteristics of our weapons. The characteristics we're interested in are those that make the weapon deadlier, since weapon damage really represents the chances that any given blow will result in a foe's death.

We'll start with what the material of which the weapon is made. For a weapon with a metal head and a wooden haft, we'll count the weapon as being made of metal.

Second, we'll think about the weapon's length. The longer the weapon, the more likely it is to land the killing blow.

* By attack vector, I mean a weapon that can be used as a piercing and slashing/chopping weapon, or maybe bludgeoning and piercing. Now, one can argue that a spear, for example, could be a bludgeoning weapon because one could strike with the haft or butt, but all we're really interested in is the ways the weapon is intended to be used.

Now, some weapons are capable of special forms of attack. For each special form of attack, you can either deduct points from the damage, or ignore this step and reward the weapon for being well designed.

One reason to do the deduction is that it might stop players from arguing that the weapon their character wields has every special ability they can think of. If they want a spear that can be set against a charge, be used as a shield and weapon simultaneously and be used to trip people, agree and reduce the its damage by 4 levels.

So, let's see how some basic weapons come out with this system. Note - I wasn't trying to create a system to duplicate a particular game system, so don't be surprised when they don't.

Clubs are wooden weapons (1 point) that are about 2 feet long (1 point). That's 2 points, which comes out to 1d4 points of damage.

Daggers are metal weapons (2 points) that are about 1 foot long (0 points) and are edged from tip to pommel (1 point). One could argue that they can be used as slashing and piercing weapons (1 point), which would give them 1d6 points of damage. If the dagger is only good for piercing, it would do 1d4+1 points of damage.

From the dagger, we can extrapolate with the other basic swords. If a dagger does 1d6 points of damage, short swords do 1d8, long swords 1d10 and greatswords 1d12.

Spears are metal weapons, at least the head is (2 points) and are about 5 to 6 feet long (4 points). Since they can be set against a charge, they lose a point, giving them 4 points and 1d8 points of damage.

A halberd is similar to a spear, but has two attack vectors (piercing and chopping), and so does 1d10 points of damage.

A flail is tougher. If it has metal heads (2 points) and is about 3 feet long from the tip of the haft, through the chain to the tip of the head (s) (2 points), then it does 1d6. If you decide it can be used to entangle, drop the damage to 1d4+1. If it is longer, increase the damage a step. If the flail has multiple heads, you might want to bump the damage one level higher.

A metal gauntlet gets 2 points, and thus does 1d4 points of damage.