Establishing a New Dungeon Order with the Masons! [New Class] 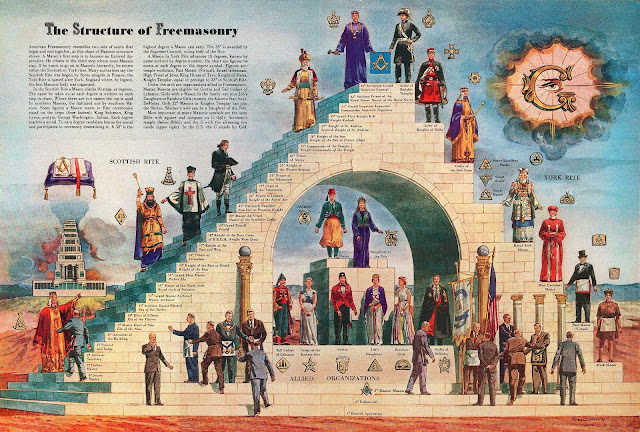 Here's the deal - Freemasonry, whatever you think of it, has some uber-awesome level titles. And level titles, my friend, mean Old School gaming to me. In short - I had no choice but to create this class. I hope it goes without saying that I mean no disrespect to actual Freemasons out there - this is just me having a bit of fun.

Guilds are common among the artisans of NOD, but none have gained such infamy as Fraternity of Stonemasons. Actually many different fraternities organized in lodges, the migratory nature of masonry has led to the formerly autonomous fraternities becoming an international network of lodges, controlled by a Great Lodge, the location and membership of which is a well-kept secret, even from most of the members. Because of the size of this network, and its being spread across many city-states, empires and faiths, there is a vague sense of hostility towards the Fraternity by many rulers and high priests, who question the loyalty of the members.

For their part, the masons are primarily dedicated to their work, traveling from castle to monument to Great Wall to dungeon, cutting and setting stone. The travels of a mason, though, send them through many strange and dangerous lands, making those masons who travel beyond the borders of their home city or town adventurers in their own right. These adventuring masons, or freemasons, make up the elite of the ancient Fraternity, garnering wealth, influence and knowledge for their lodges.

** Masons are skilled when looking for secret doors disguised as stone, but only have a knack for finding other secret doors

*** As the dwarf ability, or see New Tasks in this book

All masons are capable of cutting stone, earning a wage of 1 silver piece per day for normal masonry and 1 gp a day for ornamental masonry or overseeing up to 10 lower-level masons. Ornamental masonry requires a Reflex task check; naturally, you treat the mason as though he were “skilled” at this task.

In order to earn these wages, the mason must carry a set of mason’s tools. These tools include a pair of wooden compasses, a piece of chalk or charcoal to make marks, chisels of different sizes, a hammer, plumb, a trowel, iron and wooden dowels. These tools are kept in a large canvas or leather bag or backpack, and weigh 20 pounds.

Finally, 1st level masons learn the secret signs, tokens, grips and words of their fraternity. This counts as a secret language, much like the thieves’ cant, that allows masons to identify one another and communicate without others understanding them. Masons can also learn Earth Elemental as one of their starting languages.

A 3rd level mason (master mason) scores double damage against elemental earth creatures and other creatures made entirely or primarily of rock, stone or earth, not including gargoyles, who are just big fakers.

A 6th level mason (master elect) learns the secret rites of the Fraternity, the Rites of Elemental Earth, handed down from the ancient dwarven founders of the Fraternity. These rites permit the mason to cast a small number of spells using the same rules as a magic-user. The mason must carry a special manual filled with his spells, which are recorded in the secret signs of the Fraternity. Other masons can interpret these signs, but must pass a special Decipher Codes check as though they were skilled in the task.

Masons prepare and cast the same number of spells per day as a ranger.

**** As repel metal or stone, save it only repels stone

A 9th level mason (knight of the sword) earns the right to establish a lodge of the Fraternity in a town or city-state in which no lodge already exists. A mason who becomes a worshipful master attracts 1d6 normal masons (i.e. 0-level artisans) per level, 1d6 first level masons who wish to train under him and one 5th level mason protégé.

A 9th level mason (knight of the sword) also begins to learn to carve powerful runes, as follows:

Knight of the Sword (9th) | Rune of sleep

Knight of the Rosy Cross (11th) | Rune of persuasion

Knight of the Royal Axe (14th) | Rune of weakness

Prince of the Tabernacle (15th) | Rune of insanity

Knight of the Brazen Serpent (16th) | Rune of death

Runes work as the symbol spells, but must be carved in stone and are triggered when first looked upon by an intelligent creature. The mason can carve no more than one such rune per day, and can have no more than five runes (of any type) active at any one time.

Upon achieving 12th level (Grand Pontiff), a mason gains command over a Grand Lodge, which simply encompasses all the lodges within a given region (the definition of region here being determined by the Treasure Keeper in regards to his or her own campaign). If there is already a Grand Pontiff in the region, assume that they achieve 13th level and hand down the duties to the new Grand Pontiff. Grand Pontiffs also gain the ability to planeshift into the Elemental Earth Plane (and return to the Material Plane at a time of their choosing) once per day.

Beyond 17th level (knight of the sun), there can be only one mason at each level. A mason cannot rise beyond 17th level without supplanting a higher level mason. This can be done by waiting for them to die (arranging or causing death is not permitted, though of course one can attempt to get away with it if they are bold and stupid enough to forget all those sweet divination spells that can be used to convict them) or challenging them to a contest of masonry. These contests are usually epic in scope, requiring extraordinarily difficult works of masonry that are either decided by a series of task checks, each more difficult than the last, or by judgment from a council of masons that have achieved a minimum of 12th level.

The Sublime Prince of the Royal Secret (19th) is capable, once per day, of communing the powers of elemental earth (per the commune with nature or contact higher power spells). He alone knows the identity of the Sovereign Grand Inspector General.

The Sovereign Grand Inspector General (20th) controls the Great Lodge, which consists of all lodges and grand lodges within a single reality. As the leader of all masons, he or she is capable, once per day, of summoning an earth elemental swarm to do his or her bidding.

Edit: Crap - forgot the class advancement table with all the kickass level titles ... 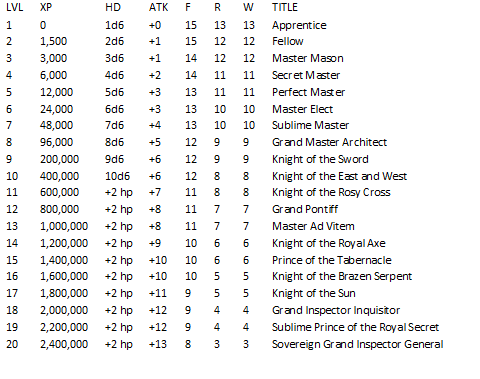