And Now For Something Completely Different ... Salsa! 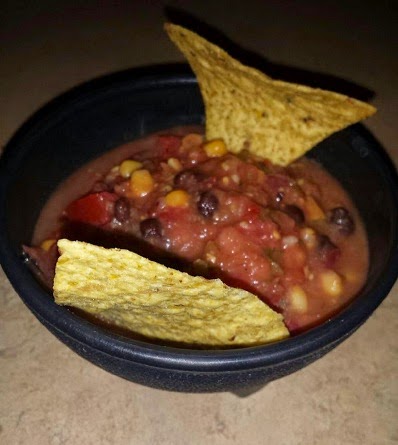 Every other year, I plant a garden in my backyard. Tomatoes are a mainstay, because they actually do very well in Las Vegas. This year, I also planted a few watermelon vines. I had good luck with them a few years ago, so I'm giving them another go.

This post isn't about gardening, though - it's about what to do with the fruits of your gardening labors.

Gaming isn't just about dice and adventures and rules - it also has an important social aspect. Games are usually hosted by someone, and a good host provides some snacks for his or her guests. It's not just my rule - Zeus himself frowns upon a stingy host!

Now, those aforementioned tomato plants in my backyard are pretty darn productive. One of things my wife and I like to do with the hundreds of these tomatoes we grow is make salsa. I don't need to tell you the value of salsa and corn chips as a snack.

What follows is the very simple recipe we've come up with for salsa. We do a pretty big batch, so you might want to cut things down (especially if you have to buy your tomatoes from a grocery store).


I throw the olive oil, corn and beans and minced garlic into a large skillet and heat it up. Naturally, I throw in a bit of salt and pepper.

While it's warming up (you don't really want to cook it), I cut all the tomatoes in half, the avocados in half, the jalapenos in half (and remove the seeds - again, I live with lightweights), the limes in half and the red onion in four parts. The cilantro is chopped up pretty fine - about a half cup.

In a blender, I throw four of the tomatoes, half an avocado, half a jalapeno, a fourth of a red onion, a wad of cilantro, a sprinkle of red pepper flakes and the juice of half a lime. I chop this up in the blender - the tomatoes usually blend pretty good - and dump this into the skillet with the corn and beans.

Repeat the blender part three more times. When everything's in the skillet, I let it come to a light boil, stirring often. My wife usually chops a few more tomatoes up and we add these when the cooking process is completed, so there are some nice chunks of tomato in the salsa. The blender (or food processor if you prefer) saves a lot of work, and seems to produce a smooth salsa. Obviously, you can add or subtract ingredients as you like - be creative (though maybe not as creative as my daughter, who wants to throw a couple Jolly Ranchers in with the veggies just to see what happens).

When all is done, we spoon the salsa into some handy jars (we usually get more than three tall jars full - the extra is gobbled up while it's warm) and enjoy salsa for a couple weeks. Naturally, you want to keep it refrigerated - my wife sometimes freezes it. If you're into putting up preserves and know what you're doing, I would suggest using that process to preserve the salsa.

When you have a game, break out the fresh salsa and a bag of chips and have at it!
Posted by John Matthew Stater at 7:08 AM