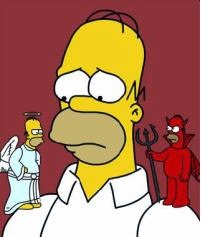 Just a quick thought on describing alignment - popped into my noggin last night while watching F Troop and editing Monster Tome (and no, F Troop did not inspire this notion - just a coincidence).

I tend to think that alignment should be kept pretty vague, and should have a little in-game effect to make it worthwhile. I've covered the "make alignment count" concept in the past, and even worked it into Bloody Basic.

In the interest of keeping alignment descriptions vague, I thought of some extremely quick (one or two word) descriptions of the alignments that can guide a player without tying them down too tightly. Each one sets up a general goal - the direction they should probably be moving - without dictating how they should behave in every single situation they find themselves.

What does each alignment think is best in life?

What of "true neutral" - i.e. balance? Don't ask me. How is an individual supposed to figure out what the multiverse requires to maintain balance. Is the player supposed to take orders from the GM? How about random rolls to determine which alignment is too powerful at the moment, so the true neutral can behave like the opposite alignment for the session? That should go over well ...
Posted by John Matthew Stater at 7:52 AM