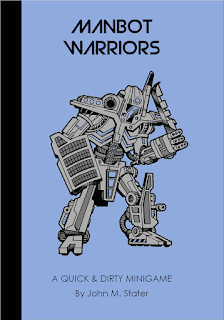 A week or so ago, I started fooling with the idea of a mini-game called Manbot Warriors based on a Saturday morning cartoon show that never existed. I like the idea of a little 6x9 booklet, short and to the point, played only with normal dice (i.e. d6) that people could take on trips or pull out on a rainy day and have fun with. Cost should be minimal - maybe $6 or $7 for a book and a couple bucks for a PDF.

Well, Manbot Warriors is getting some play testing and I already have a first draft being printed at Lulu so I can see how I did on the technical side. I've also worked up a rough draft for a Greco-Roman fantasy mini-game called Swords & Sandals - based more on old Hercules and gladiator movies than actual history, of course.

I'm super excited about the idea of inexpensive mini games at the moment, and if I can get the rules right, I should be able to have lots of fun with the concept. In fact, my imagination has been racing. Here are the ideas/titles that I've pondered trying to make:

Deviant Decade - 1970's era role playing on the mean streets - the adventurers are a party of vigilantes, cops and frightened citizens trying to make their way from one point to another in Big City (probably based on New York)

Emergency Rescue - firemen, paramedics, police fighting fires and rescuing people from harm; inspired by plastic firemen I had as a kid and the old Emergency! TV show (which I still watch to this day)

Love & Pain - a soap opera RPG - I think I have a clever way to make it work, but I'm not sure yet

Hippie Hijinks - inspired by the old Fabulous Furry Freak Brothers comics I inherited from a friend (I was always a Fat Freddy's Cat guy myself) - sneaking into Disneyland, fighting "The Man", etc.

Goblins & Pagodas - Asian fantasy; got the name from a poetry book in the public domain

Justice For All - A quick and easy superhero game

Kaiju vs. Mecha - you play the mecha operator - fight the kaiju in your machine, and try to discover, on foot, it's secret vulnerability

MegaRuin Explorer Tatakai - dungeon exploring anime style - again, I have some cool stock art, and I want to use it

Mutant Truckers - Likewise, this would work well in the mini game format

Astronauts & Aliens - I'm thinking a 1960's, space age game of Astronauts (and Cosmonauts as well, I guess) exploring alien ruins on the moon. The technology would be "of the time", so no ray guns and such.

Don't Go In There - Horror RPG - party of normal folks being stalked by a monster or slasher or whatever. Might try to do this one for the next issue of NOD and include it as a mini-game for the Halloween season.

B for Barbarian - I'll probably change the name, but I wrote this mini-game a year-or-so-ago and will definitely publish it in the 6x9 format.

Pen & Paper Football - Not quite the same, but the rules for the mini-game I published in NOD a few issues back. This is a no-brainer, so it will definitely happen at some point.

I did a poll with five of these on Google+, and Deviant Decade and All-Out War were the most popular (which is cool, since I figured I'd be writing them soon anyways). Let me know which one's spark your imagination. I've also considered doing a combo of easy rules with actual short adventure included, something like the one-page dungeons.

In the meantime, I have GRIT & VIGOR and NOD 27 to finish up.

Remember - if you'd like to submit something to NOD, please contact me - email in the column to the right.