To be completely honest, The Dragon was not the biggest thing that happened in May 1980.

That being said, it may have been the biggest thing that happened in RPG's that month, and that's good enough for me. Let us delve into the top ten things about The Dragon #37.

Arthur W. Collins fills in the alignment gap of dragons in this article, and introduces the gemstone dragons we have all come to know and love (well, some of us). These are dandy creatures, especially if you're into psionics. What follows are some quick stat blocks in Blood & Treasure style for the gemstone dragons (all adults, max. hit dice):

Inflict one on your players today! 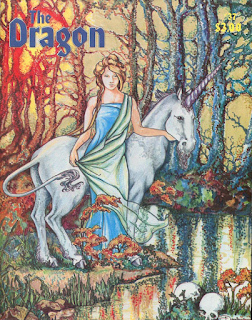 "On other fronts, it seems likely now that TSR and Games Workshop have reached a final agreement regarding the publication of the Fiend Folio ..."

Love the Fiend Folio. Love it.

"Question: My character is a 9th-level Druid changed to a Magic-User (he is now 10th level as a M-U). I want to be able to put my previously owned Apparatus of Kwalish inside my newly acquired Mighty Servant of Leuk-O. Then I would have the ultimate weapon ..."

So I'm knee-deep in writing Black Death, which is set, vaguely, during the Thirty Years War and the Wars of Religion. What article do I happen to come across, but "Armies of the Renaissance by Nick Nascati Part VI - Landsknect and Reiters".

Apparently, the Landsknecht army (and my game) should include:

Infantry - pike-armed, in the style of the Swiss pikemen they were trying to counter

Light Cavalry - dressed as landsknechts, armed with arquebus or crossbow - trained as skirmishers and scouts

Ritters - armored lancers with full plate, battle lances and longswords, and plate barding for the horse

The landsknechts were true mercenaries - a good war to them was one with lots of prisoners they could ransom!

T. I. Jones presents a very long article about magic research for magic-users and clerics. I think it's one of those interesting pieces that tried to deal with all that treasure that was floating around in AD&D. The idea, which I generally ascribe to, is to keep the players needing money, and that keeps them delving into dungeons. The DMG had training costs, which we never used when I was a kid and which I now understand were kind of important to the game. There was also the expense of one day setting up a stronghold. This article gives another - magic research. For example:

"Research in one’s own library will require that such a library have been acquired and built up over the course of several levels of experience. It should be not only difficult but expensive to acquire such a library—a minimum expenditure of 10,000 gold pieces per level of the spell to be researched is recommended. That is, if a Magic-User is to research a second-level spell, he should have spent at least 20,000 gold pieces on his library."

Speaking of libraries, the next article, by Colleen A. Bishop, is a random book generator. Let's build a library shelf by rolling some percentile dice:

Our shelf contains 250 scrolls (holy cow! - I'm not rolling up all of those) and five books. There's a 4% chance of a scroll being magic, so there should be 10 magic scrolls on the shelf. The books are two histories of particular castles, a book about the inferiority of kobolds to human beings, and another about how humans are better than dwarves and an alchemist's notebook in which the writing is too difficult to read.

This would be an excellent random table to automate, to produce large libraries quickly.

Lawrence Schick and Tom Moldvay present another batch of literary heroes for D&D. This time, the article does not include any character stats. Rather, it describes the rationale used by the authors for creating their stats. The article includes a great passage about doing stats for Tolkien's creations ...

"As far as writing up the characters from Tolkien’s Ring Trilogy, we would love to try our hand at them. Unfortunately, the Tolkien estate is known to be fanatically paranoid about the slightest possible infringement of rights (whether real or imagined). We were also unwilling to attempt them because 90% of the Tolkien fans would be unhappy with the results, regardless of what they were. In the end, we decided it was simply too much hassle to write up Tolkien characters."

Yeah, this would be post-lawsuit.

The article has a nice table comparing AD&D to D&D levels, which I reproduce:

AD&D 21+ = D&D 40+ / equivalent to demigods, for characters with magically extended lives or who are in close contact with the gods

Here's a nice table folks should find some use for ... 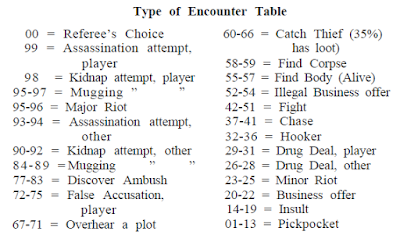 #7. Nothing New Under the Sun

From the letters to the editor ...

"Unfortunately, I do not feel so good about Mr. Fawcett’s article, “Angels in Dungeons and Dragons.” Yes, I did read the article’s opening statement about the source material being both religious and fictional in nature. As a DM, I will admit that the concept of having angels for the deities of a mythos is intriguing. However, it is the source material that bothers me. Let us remember that much of the article was derived from the Holy Bible, and as far as I’m concerned that is not a book to be taken lightly! Games are games, but the Word of God is not something to be used in such a manner.

Some goodies in the Bazaar of the Bizarre this month. Here's an inventory:

They run around in groups of 4d6, and have voracious appetites. I think they'd be a great encounter in dry hills. 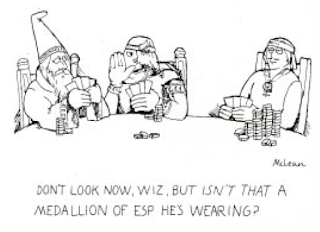 Always loved the art style, and the humor 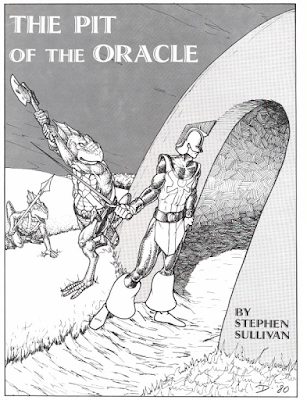 The module contains a dungeon and a town (and a Temple of Apathy), as well as some other nice art pieces by Dee, Roslof, Otus and Sutherland. You can tell the elements of D&D's most classic phase are all coming together.

The map has all sorts of notations on it, which makes me think the adventure is a bit complex ... but it also looks really cool. Hey, maybe that's just the art talking.

And that's Dragon #37 - happy Sunday folks and have a groovy week ahead.
Posted by John Matthew Stater at 8:30 PM