A few spells occurred to me recently which I thought might be especially annoying to enemy spellcasters, bards and those who are generally talkative. 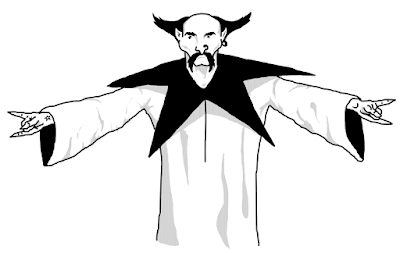 This spell causes people to speak unintelligibly for the duration. They understand other people perfectly well, and think they are forming normal sentences when they speak. They do not, therefore, realize that are speaking gibberish until it is pointed out to them. The afflicted may attempt a Will saving throw to negate the effect. Thereafter, he may attempt secondary Will save to make himself intelligible, with a penalty of -1 per word to be spoken. Spellcasters can make similar saving throws to utter their spells properly, with a penalty equal to the level of the spell +1. If a spell is uttered as gibberish, it is still considered "used" for that day.

This spell affects up to 10 targets within 120 feet. The targets, if they fail a Will saving throw, cannot help but speak as loudly as possible. These booming voices have the normal chance for attracting wandering monsters, and might cause other calamities as well (per the TK's discretion).

This spell causes a single target, who can negate it with a successful Will saving throw, to divulge any secrets she is keeping for one minute. They usually start with their most pressing, timely secrets (like her plan for assassinating the king and queen with an exploding hedgehog), and work their way towards long held secrets from childhood (stole some tarts from the castle kitchen when she was 9).

This spell creates something akin to an unseen servant, save it will do nothing but transcribe the activities of the spellcaster and her associates for 1 hour, including drawing a map of where they have explored in a dungeon and taking down all conversations within 60' of the unseen clerk. The spellcaster can cause the unseen clerk to strike things from the record as she desires. The spellcaster must provide a pen and paper for the unseen clerk, and they will follow her around, busily scratching things down as she goes.

Posted by John Matthew Stater at 8:43 AM