I don't know if the Monster Tome II will ever be a physical (or electronic) product, or if it will just be a series of blog posts. Either way, here's an entry for you ... 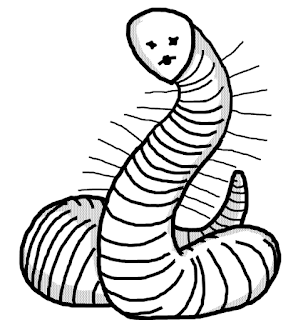 The worm harmonious looks like a long, thick, wriggling vermin with pale pink flesh (sometimes marked with saffron streaks or speckled with deep aubergine spots) and odd markings on its "face" that approximate a mime or geisha. Extending from its head, down the sides of its body for about 10 feet are a number of long "hairs", which it can vibrate to create or negate sound. Its entire body is actually covered by these hairs, though most are much smaller and are nearly invisible.

As alluded to above, the worm harmonious can negate sound, and thus create an area of silence (as the spell) in a 100' radius by using its hairs to absorb the sound. While absorbing sound, the monster cannot move, and its attacks suffer a -3 penalty to hit. After three rounds, the monster can release this absorbed sound as a sonic blast, dealing 1d8 points of sonic damage to all creatures within 30'. Alternatively, it can give off a low, disorienting hum for 3 rounds that forces all within 30' to pass a Will save or suffer one of the following effects:

It can also use its hairs to create a horrible, piercing screeching noise approximating some of the less successful attempts at Jimmy Hendrix-style guitar riffs. While doing this, the monster attacks normally, but its foes suffer a penalty to Armor Class and attacks, combined, equal to -3. They can choose, for example, a -2 penalty to AC and a -1 penalty to hit, or no penalty to AC and a -3 penalty to hit, etc. As long as the penalties add up to -3.
Posted by John Matthew Stater at 7:10 PM