Happy Halloween boys and girls. Here are a few spells inspired by the season:

To cast this spell, a druid carves a jack-o'-lantern from a pumpkin or similar gourd and places a candle inside it. The light emanating from the jack-o'-lantern's face has a magical effect, as follows:

The light from the jack-o'-lantern also negates magical invisibility, and causes magic items to glow orange.

The magic lasts as long as the candle lasts (probably 1 or 2 hours), and the range is per a normal lantern. 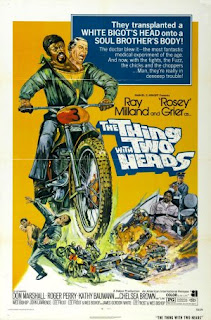 If during the duration of this spell the magic-user is killed, his or her head immediately teleports to and is transplanted on the nearest humanoid creature within 30 feet. The victim's head remains on the body as well.

The magic-user and his subject will be dazed for 1 minute afterwards, and the magic-user will be unable to cast spells until it takes control over the victim's body. Each day, the magic-user can attempt a contest of wills against the victim; each rolls a Will saving throw. If the magic-user succeeds at his save, and succeeds by more than the victim, he gains control of one arm. Another success wins him the other arm, and a third the legs. A failure over the same period loses him an arm or the legs. When the magic-user has control of the arms, he can cast magic spells again as normal.

(Yeah, The Thing With Two Heads was on TV this morning).

As hideous laughter, with the following differences: The victim is not completely helpless - they can move and even attack, but cannot stop cackling. Any strenuous activity causes fatigue for 10 minutes. Also, the cackling forces those who hear it to pass a Will save vs. fear or be affected as per the cause fear spell.

This spell turns bone into steel. Only dead bones (i.e. not part of a living creature) are affected. Bones like femurs are turned into the equivalent of light maces. Animated skeletons gain AC 17.

The beneficiary of this spell does not suffer from gaze attacks as normal. If the gaze normally causes fear or blindness, it now instead reduces the victim's Wisdom by half. If the gaze normally causes petrification, it now instead reduces the victim's Dexterity by half. Other effects can be determined by the TK as necessary. The effects of the gaze attack last for 3 hours.

The touched victim must pass a Fortitude save or their face is twisted into a terrible grimace, reducing their Charisma score to 3 for the duration of the spell.

Have fun, folks - don't eat too much candy!

The magic-user holds an object (any object) up and focuses on a single victim. If the victim fails a Will saving throw, they become obsessed with possessing the object for 10 minutes, to the exclusion of all other goals. When they get the object, they crouch on the floor, petting it and proclaiming it their "precious".
Posted by John Matthew Stater at 12:16 PM