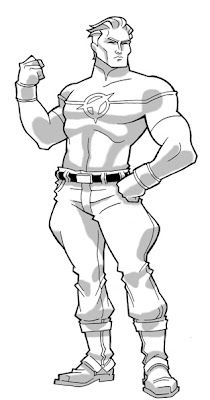 The following is a test of the Mystery Men! combat rules. If this were an actual game session, all of the rules would work perfectly ...

When you're attempting to place a giant laser on the Moon, curious heroes can really get in the way. To keep Captain Triumph occupied, Doctor Death decides a rampaging giant robot is in order ...

* Just noticed the damage was missing in the rules - another piece of errata and proof that play testing is necessary!

I've modified this giant robot to put it closer to Captain Triumph's weight class, so to speak. I've reduced the Hit Dice by 3 and the DC by 10.

This fight will take place on a city street flanked by tall buildings. Police, fire and rescue have cleared most of the civilians out of the way, and the giant deathbot is mostly just causing property damage - it's trying to draw the hero in and waste his time while Doctor Death launches a rocket into space. Captain Triumph will enter the combat flying and invisible ...

ROUND ONE
Initiative: Each combatant rolls 1d10+speed+Dex bonus. That means 1d10+1 for the giant robot, 1d10+5 for Capt. Triumph. Since Triumph begins the round invisible, I'm going to give him a free attack in the first round. Since his speed is double that of the giant robot, he gets two actions per round against it.

Capt. Triumph: Triumph knows that tackling this metal monstrosity is going to be tough. It's hard to damage (too hard maybe - I might need to revise Iron Body) and the Energy Bolts are quite deadly (they cap damage in d20 - I might need to do the same). For his first round of combat, he's going to use both actions to roll special attacks, trying to trip the thing. He'll be invisible for the first attack, gaining a +2 bonus to hit.

So, special attack rules state that you make a normal attack, but if you beat the opponents DC by 5 or more you pull off the special attack. Unfortunately, this means Triumph needs to roll a 25 or better to trip the deathbot. So, Triumph is going to roll 1d20+Attack Bonus+Strength Bonus, or 1d20+13 for melee attacks (plus an additional 2 for the first attack, because he's invisible). He rolls a [17] and [24]. Both attacks fail to trip the deathbot, but the second attack does beat the deathbot's DC and inflicts damage. Capt. Triumph rolls 1d6+5, getting an [11] - not enough to score damage on the deathbot, because of the Iron Body power. Now - Capt. Triumph should be able to inflict some damage on this thing - the damage reduction for the Iron Body power has to be reduced. I'm going to make a command decision here and drop it to a 6. That keeps somebody with Iron Body impossible to damage by a normal human using their fists. So, with our revised Iron Body power, Capt. Triumph scores 5 points of damage on the Death Bot, reducing its hit points to 85.

Deathbot: The deathbot needs to get Triumph off his back, so he's going to attempt a grapple special attack to grab him. For attacks, he rolls 1d20+18 and needs to beat Triumph's DC of 17 [yeah, just noticed I put AC on the character sheet - old habits die hard!] by 5 or more to grab him. With a roll of 29, he grabs him easily, scoring 10 points of damage in the process, bringing Triumph's hit points down to 85.

Triumph: So, with his two actions, Triumph is first going to try to break out of the deathbot's grip - this is treated as a special grapple attack. Triumph rolls a [20] - enough to score damage (4 points), but not enough to break the grip. With his second action, he tries again, rolling a [24] and missing his goal yet again. He rolls a [6] for damage, which isn't enough to harm the deathbot. At the end of his turn, Capt. Triumph has now reduced the deathbot to 78 hit points.

Deathbot: The deathbot now unleashes some lightning bolts from its eyes. Triumph needs to make a feat of Dexterity (1d10+7) vs. a 20 - meaning he has no shot at cutting the damage in half [do I need to reduce monster feat bonuses to half their hit dice?]. The robot rolls 15d6 and scores [57] damage, reducing his hit points to 28. One more shot like that, and Triumph joins his ghostly brother in the afterlife.

Triumph: Triumph still needs to break the robot's grip, so he tries another special grapple attack, rolling a [30] this time, scoring damage (2 points) and breaking the grip. Deciding he needs something heavier with which to do damage, he flies 200-ft down the street (out of the energy bolt range and behind the deathbot) to find a handy wrecked car he can use next round. The deathbot now has 76 hit points.

Deathbot: Well, sucks to be slow. The deathbot turns around and lumbers toward Capt. Triumph, closing the distance from 200 to 150.

Triumph: Fortunately for Capt. Triumph, he continues to beat the deathbot on initiative. He picks up a car (his strength allows him to lift 4 tons, so a car is within his capabilities) and flies directly above the deathbot's head with his first action. With his second action, he launches the car straight down at the lumbering robot. We'll call this a ranged attack, which brings up a couple items that need to be addressed in the rules. I now notice that I include ranges for some weapons, but no discussion about how range influences attack rolls. Range for hurled items should probably be based on Strength - for now I'm going to punt on this rule and impose no penalty - I want to think about it a bit more. The second issue is one of damage - how much damage does a car inflict? Knives do 1d6, arrows 2d6 and bazookas 6d6 - I think given the weight of the car, 6d6 sounds about right - but I'll also make a note that thrown objects need to be covered in the rules ('cause heroes like to throw things in comic books!). So, Triumph rolls a ranged attack with the car (1d20+11) and gets a [25]. Since he wasn't using a special attack, beating his opponent's DC by 5 nets him double damage, or 12d6. He rolls a [36], dropping the deathbot's hit points to 40.

Deathbot: Deathbot figures that what's good for the goose is good for the gander. He picks up a car of his own and hurls it at the flying Triumph, rolling 1d20+18 to attack and getting a [28] - that means double damage as well. The deathbot rolls a [54], sending Triumph into Valhalla.

LESSONS LEARNED
1. I need to work up some range rules, especially for hurled objects.
2. I need to work up some damage guidelines for hurled objects.
3. Iron Body needs to be revised and Energy Bolt needs to have damage added to its description.
4. Giant robots, as written, are deadly as all get out. I should probably revise those stats, or maybe include a lesser and greater version of them. I definitely learned that even a weak giant robot is too much for a single 35,000 XP hero to survive. I might work up some stats for Superman, Thor or Hulk and do this battle again to see how it would play out.
5. In playing this out, a smarter player might have started hurling cars earlier in the battle, and thus might have survived and won. Tactics should be at least as important as statistics in affecting the outcome of a fight.