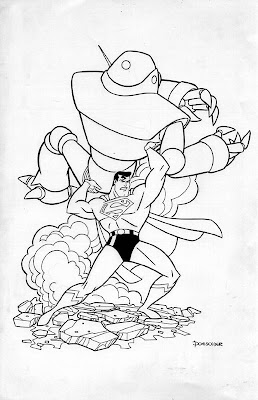 When last I pitted the Deathbot in battle against Captain Triumph, I had to admit that the good Captain, a 30,000 XP character, was a bit outmatched. I wondered then how the Deathbot would fare against someone more powerful - enter Superman.

Superman is built using 150,000 XP and I assigned his ability scores to make him just about as tough as I could. Truth be told, you just can't roll this guy up in Mystery Men! using the rules  you bump the number of starting ability dice - an option I plan to include in the finished rules.

Here, then, are the stats for the Man of Tomorrow ... and of course, these stats are not intended to infringe on or threaten DC Comics' intellectual property or copyrights.

*I assigned the ability scores, but still figured he should have to pay for super strength, dexterity and constitution

And yes, Superman probably has about 100 other powers - I'm hitting the old tried and true with this list.

The last Deathbot was toned down a bit - Superman is going to face off with a fully powered giant robot with the following stats:

This battle will take place on a street in a major city, and Superman will begin the battle in flight. Let's fight ...

Superman is always going to win initiative against the Deathbot, so we'll forgo future initiative rolls to speed this up. Because of his speed (7) is seven times higher than the giant robot, Superman gets 3 actions per round.

In round one, Superman is first going to charge into the Deathbot and attempt to knock it down. This will give him +1d6 damage for the attack, but reduce his DC by 3, to 20. Superman rolls 1d20 + FB + Str and gets [32], scoring 1d6+9 + 1d6 damage and rolling [17] and scoring only 12 damage due the robot's iron body. He follows up with a blast of his heat rays and then another wallop from his fists (or fisks, if you happen to be Popeye). He rolls a [41] for the heat rays and a [26] for the punch, scoring a hit from the heat rays. He rolls 13 damage. The Deathbot rolls a feat of constitution and gets [25], enough to cut the damage in half to 6. The Iron Body power of the Deathbot cuts that in half again, to 3.

The Deathbot strikes back with his own energy bolts (electricity). He rolls a [25], enough to hit Superman, and causes 72 points of damage. Superman rolls a feat of constitution to halve the damage and gets [17], not enough to save.

We end the round with the Deathbot having 85 hit points and Superman reduced to 216 hit points.

Superman has three actions again. The heat rays were pretty ineffective, so he's going to focus on grappling the robot and lifting it. He can lift 100 tons without difficulty, so I would rule that he could do it. To grapple it (i.e. grab it) he's going to have to beat the robot's DC of 30 by 5, i.e. he needs to roll a 35. Even if he just beats the DC of 30, he'll manage to cause some damage. This round, he rolls [33] and then [42] for his first two actions. The first attack scores [13] damage, reduced to 8 due to iron body. The second attack scores [14] damage, reduced to 9. The second attack beats 35, so he manages to grab the robot. He'll use his last action to fly the robot about 1 mile up (he could go up to 50 at his speed, but 1 mile should be sufficient).

The Deathbot is in pretty serious trouble, but being a robot he focuses on the task at hand. He'll attempt to make two slam attacks against Superman, rolling [37] and [24]. He scores two hits, rolling [8] and [13] damage. Superman's stoneskin power reduces these to 5 and 10.

At the end of Round Two, Superman has 201 hit points left, the Deathbot has 68.

ROUND THREE
Last round of combat, most likely. Superman is going to let the beast fall. Falling damage, like in the original game, is 1d6 per 10', with a maximum of 20d6. On the way down, I'll let the Deathbot make a final energy bolt attack. He rolls a [21] and then rolls [59] points of damage. Superman makes a constitution feat, rolling [15] - not enough to cut the damage in half. When the Deathbot hits the ground, he takes 58 points of damage, reduced to 53 because of iron body. The Deathbot gets a dexterity feat to take half damage from the fall and rolls a [7], failing. Technically, Superman still has two actions left, so he's going to use one to fly back down and the other to punch the Deathbot. This will count as a charge. He rolls a [44] to hit. Since he wasn't using any other special attack, beating the 'bot's DC by more than 5 means double damage. He rolls 2d6+18 plus another 1d6 for the charge, getting [19], which is reduced to 14 because of iron body.

At the end of Round Three, Superman has 142 hit points. The Deathbot has 1 hit point. Tough little guy, isn't he.

ROUND FOUR
Nothing fancy this time. Superman is going punch, punch and punch. He rolls [28] [25] and [35]. All three punches do damage, and the last punch does double damage. He rolls a total of 55 points of damage, reduced to 40 because of iron body. More than enough to finish off the Deathbot.

WHAT I LEARNED
Superman outclassed the Deathbot, but only at 150,000 XP. Reduce his starting XP to 100,000 and his level drops to 11 - that means far fewer hit points and a reduced attack bonus, and Superman is in for a far tougher fight. Given that the giant robot is supposed to be a useful monster in the game, I'm definitely going to knock him down a few pegs - specifically the DC, probably to 25. I also think I'll cap the energy bolt, in fact all damage from powers, at 10 dice.