On Antigoon - City of the Sun 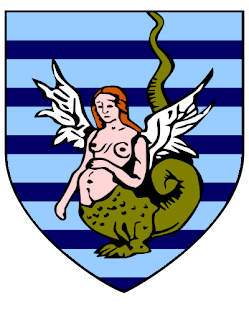 Yay - I'm about 90% finished writing my three cities - Antigoon, Lyonesse and Blackpoort. I think I'm going to crank out an article on "Well Dressed Delvers", make some adjustments to my Noble and Everyman classes (should post them soon enough) and then I'll be done with NOD 7. I've commissioned an illustration of the Cyclopean as well and maybe a short adventure for PARS FORTUNA. I'll have a full table of contents soon. In the meantime, enjoy some locales in Antigoon ...

The Merchant Adventurers: The Merchant Venturers are the most famous merchant company in the Motherlands, and among the wealthiest organizations on Nod. Their headquarters is a four story building of glazed brick, as black as a tinker's pot and adorned with white marble accents and sculptures of famed venturers and sea nymphs. The interior hall is floored with ebony and decorated with white velvet couches and burnished bronze furniture. A large troll, dressed in ruffled silks and satins and holding an ornate halberd guards the entry hall, terribly aware of the blazing furnace that rests just beneath the floor. A secretary in long, silk robes the color of desert sand and holding a wax tablet directs those with an invitation either to the lounge or upstairs to a meeting room. Those without an invitation are either tossed out by the troll or asked to wait while inquiries are made as to whether they will be seen.

The ground floor of the building houses a lounge wherein members may relax, play cards or backgammon, sip an aperitif and work on a cold piece of roast. There is also a shrine dedicated to St Meingold, patron saint of the company. The upper floors contain secret rooms and vaults, meeting rooms and guest quarters. Each floor is guarded by four swordsmen and a crossbowman wearing the livery of the Company, a blue field emblazoned with a black ship and two gold dolphins.

The current master of the Venturers is Glynnick Melf, a woman of forty summers who looks much younger. Glynnick has tanned skin that shows the effect of many years of sun and spray. She has brunneous hair worn in long curls and keen, beryl eyes accentuated with kohl. Towering and lanky, with a barbaric sense of humor, Glynnick has seen much of the world, from the dragon courts of Mu-Pan to the many-armed fanged idols of Kirkersa to the swaggering pirates of Janus and the reeking swamps of Rogue's Harbor in Antilia. She has bested vampires and mummies, beaten an ogre mage in a contest of riddles and stolen two hordes from under the noses of wyrms. Glynnick is married to Brabo, twenty years her junior and son of Prince Fortunatus. It is marriage of convenience to both of them, and neither take their vows seriously.

Kirikersan Factory: This 3-story baroque building was once the chief residence of the Stewards of Brabo, and is now home to the merchants of Kirikersa who work and trade in Antigoon. The factor is Shanthet, an effeminate man of great intelligence and a surprisingly deep voice. Capricious and always on the verge of an ill humor, Shanthet has rich, caramel skin, hair the color of moonlight striking a deep mountain lake and eyes of teal and Persian blue. Despite his slight figure and gauzy manner, Shanthet is a deadly warrior. He usually wears +2 armor of leather scales beneath his silk robes and his schooling in Kirkersan wrestling gives him a +2 bonus to grapple opponents or knock them prone. Shanthet is married to Divixa, a haughty woman of royal blood (distantly) from Kirikersa who is ever ready with a sneer and a petulent remark. His children, Seafren and Valdur are both cadets at the Academy.

Cut-Rate Alchemy: This 3-story brick building features a rank cellar laboratory and two frightened families of boaders. Rented from the government by old Caudryk (2 hp), a musty alchemist with greasy bangs and a gimpy leg, it is frequently wracked by explosions and engulfed by plumes of acrid, polychromatic smoke. Cauldryk runs a cut-rate business in minor alchemicals, though he is a master alchemist who is capable of producing astounding things. He knows the recipe for the universal solvent, but lacks the patience to see such an operation through. Cauldryk is a fanatical worshiper of Law, especially in the person of Prometheus.

The House of Brun: This two-story structure is constructed of brick faced with chocolate-brown marble. It features two large windows that face the street and a gilded door. The tables before the windows are reserved for the highest ranking nobles or wealthiest merchants in the chocolate house. Chocolate is served in the establishment mixed with creamy milk for 1 gp per cup, and small tins of powdered chocolate are sold as a medicine for 5 gp per tin. The house has become a meeting place of the elite, and a guard is usually posted at the door to ensure the riffraff stay out. The interior of the place is decorated with exceptionally fine furniture and paintings by some of the most celebrated artists in Antigoon, few of whom are wealthy enough to visit. The place is run by a young man called Garric Brun, a former pirate and “citizen” of Port January. Studious and intellectual, he now dresses in finery and talks politics and philosophy with the upper crust of Antigoon. Garric has swarthy skin that he lightens with powder. He has pumpkin red hair and glandaceous eyes that sparkly whenever a gold coin clinks in his purse.

Theater Sol and Theater Lune: These two theaters are run by twin sisters Herna and Gwelda, daughters of Juand, a famed raconteur and bard who died about a decade ago, leaving the old Theater Lune to his favorite daughter, Gwelda. Herna was incensed, and so used what money she could borrow to open the Theater Sol across the street.

The Theater Lune is a four story building of dressed, amber colored stone with white marble accents around the door and window. A crescent shaped window above the door gives the building its name. The Theater Sol across the street was also four stories tall, but a tall platform supporting a wooden sun painted bright yellow has been constructed to make it taller than its competitor. Both buildings have an antechamber equipped with benches where entrance can be purchased for a silver coin. Beyond the antechamber there is a large room, two-stories tall, with a stage and balconies for wealthy guests (1 gp) – other folks must stand through the performances.

Herna VeoJuand is a young woman, plain of face and standing only 5' 6” tall. A careless dabbler in Chaos, she has twice lost husbands at sea. Usually calm and forgiving, mention of her sister or father bring out her dark side. Herna has tan skin, flaxen hair and sepia eyes.

Gwelda VeoJuand is a compassionate woman who is married to a the playwrite Horngyrth (another annoyance to Herna, who failed at her own attempts to woo him). Bitter towards her sister, she could easily be her double. 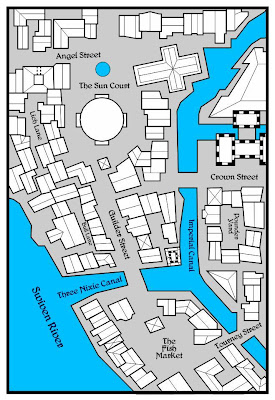