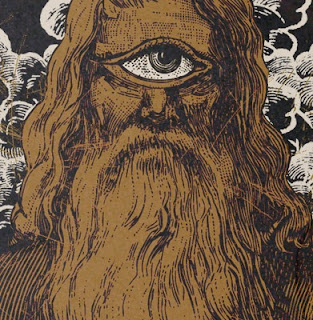 Having watched Krull over the weekend - a dandy fantasy movie, in my opinion - I was inspired to do something inspired by the cyclops in that movie. The cyclopean is designed for PARS FORTUNA, but should be readily usable in other old school-style games ...

CYCLOPEAN (ARIMASPIAN)
The Cyclopeans are tall, rugged humanoids with a single, large eye located in the center of their face. Cyclopeans have skin tones that range from the color of aged parchment to a rich, glossy umber. Their hair is usually worn long and shaggy, and is always blue-black in youth and adulthood, turning white as a Cyclopean enters his or her later years. The Cyclopeans eye might be any color in the spectrum, with amber and blue being the most common colors, and mauve and mottled green/brown being the rarest.

A warlike people, the Cyclopeans nonetheless have a philosophical side - probably an artifact of their unique ability to see into the future. Born fatalists, they know well the curse that accompanies their power, and take care to only pierce the veil of time when their lives, or the lives of their loved ones, depend on it. Most Cyclopeans dwell in the wilds or on the fringes of civilization, making a living as trappers, hunters and bandits. They have a passion for fighting, but lack the organization of the Oraenca or their flair of the Ilel. Cyclopeans like to rush into battle, casting their military forks and then drawing their hand weapons to close with the enemy. Cyclopean warriors usually wear light or medium armor and carry shields, military forks and broadswords. They might also carry slings and knives.

Cyclopeans see in the Skathra kindred spirits, both for their wild ways and their divinatory powers. They respect the Bo'al, Oraenca and Olvugai as worthy warriors, and though they fear the deadliness of the Ilel, they can't quite bring themselves to respect them.

Cyclopean names are short and to the point, and are usually followed with a wad of spittle if the name is despised or a clang of the fork on the ground if revered. Common names include Bach, Brel, Cert, Oban, Tohr and Venn for males and Azra, Jula, Kento, Mala and Trena for females.

Cyclopeans adventure for money, fame and a love of action. Cyclopeans like to stay on the move and stay in the action, for it helps to keep their fatalistic moods at bay.

Racial Abilities
All cyclopeans have the following special rules:

1. Cyclopeans have poor depth perception and peripheral vision. All opponents are treated as though they have a knack for surprising them. Cyclopeans suffer a -1 penalty to hit with ranged attacks, except when using their military forks, with which they train from childhood.

2. Cyclopeans have a knack for wilderness survival and reading people's faces. This helps them discover falsehoods and guess at intentions.

3. No more than once per day, a Cyclopean can peer into the future. They will either glimpse a moment of Weal or a moment of Woe (50:50 chance). The moment glimpsed will be connected to their current endeavors or goals, and can be described with as much or as little detail as the Referee thinks appropriate. A Cyclopean might, for example, glimpse himself or a friend opening a door and being struck dead by a trap, or looking behind a curtain and discovering a secret door. Perhaps the door or curtain is unique and the Cyclopean will easily recognize it when they come to it - perhaps not. Perhaps the Cyclopean will never come across the possible future they have glimpsed. In general, this power acts as a free "clue" to something in the Cyclopean's current adventure.

4. Whenever a Cyclopean glimpses the future, they hasten their own demise. For the next 24 hours, the Cyclopean suffers a -2 penalty to saving throws made to avoid death, damage or danger.

Prime Requisite: Constitution (+5% bonus to earned XP if 13+)
Hit Dice: 1d6+2 (or 1d10), +2 hp per level after 9th
Saving Throws: As warrior
Attack Bonuses: As warrior
Restrictions: Cyclopeans can use any weapon, light and medium armor and shields.
XP Advancement: As the Oraenca

Cyclopean characters turn their racial knack for reading faces into a skill.

Cyclopeans can go berserker once per day. This berserkergang can only be entered once they have suffered damage in battle or once they have inflicted damage in battle. Once the berserker state is entered, the Cyclopean remains in it for a number of rounds equal to their Constitution divided by 3. They cannot exit the berserker state prematurely without passing a saving throw, and will attack anything in reach while under its spell. While berserk, a Cyclopean gets two melee attacks per round and inflicts +1 damage with melee attacks, but suffers a -2 penalty to Armor Class. A Cyclopean suffers from exhaustion for a number of hours equal to the rounds of combat they spent while berserk unless they spend a full turn after the battle resting.

Picture nabbed from HERE
Posted by John Matthew Stater at 9:00 AM