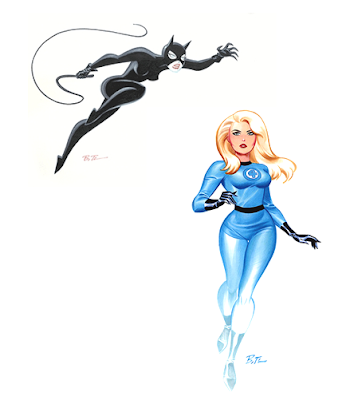 Now there's a blog title that has to get some attention, right?

Well, a couple weeks ago I statted up Catwoman and Invisible Woman using the alpha rules I'm writing for Mystery Men! I'm about one or two weeks away from putting my beta rules out there for the world to playtest. The stats below take into account a couple changes from alpha to beta ...


Now that I have some stats for a hero and a villain, the only thing left to do is have them fight.

Getting wind that a valuable statue of Bast taken from the tomb of the Living Mummy was recently locked in the vault at the Baxter Building, Selina Kyle decides a trip to New York is in order. Doing her homework, she discovers that on one particular night, three of the Fantastic Four will be away from home, Johnny doing some publicity stunt in L.A., Reed lecturing at Medfield College on the possibility of a computer's circuits being impressed upon a human mind, and Ben Grimm involved in some sort of team up. That left the Invisible Woman alone to hold down the fort, giving the infamous Catwoman odds she could live with.


Having picked her way through the building's security (involving many heroic feats of Dexterity and Intelligence - see the rules document for an explanation of feat rolls), she finally gets to the vault. Unfortunately, one of those feats was unsuccessful, and the Invisible Woman, getting the alert, proceeds to the vaults to confront what she figures is a routine malfunction. As she enters, the Catwoman strikes ...

Feats replace skills and saving throws in Mystery Men! The dice you roll for a feat depends on the difficulty of the feat, rolling 1d10 for normal feats, 2d10 for heroic feats, 3d10 for super feats and 4d10 for epic feats. To succeed at the feat, you must roll under your ability score + your feat bonus. In IW's case, she needs to roll under a 10 to make a feat of Constitution. Since CW is 16th level, avoiding her powers and attacks requires a super feat, thus rolling 3d10. IW gets lucky, rolling a 9 and maintaining consciousness.

IW backs off a bit and launches some force missiles. Although based on the magic missile spell, I decided that a power that can potentially be used every round had better require a ranged attack, in this case against a DC of 10 + the opponent's Dexterity modifier, or 16 in CW's case. As an 11th level adventurer, IW can launch five missiles, rolling 26, 28, 21, 26 and 13, and thus hitting with four missiles for 4d6 damage + 1 per die for IW's Dexterity bonus, rolling a 13.

Panel Two
CW rolls a 14 for initiative, IW a 9. CW decides to use her whip this round, making a ranged attack against IW's DC of 15. Her special attack this round will be tripping, needing a 21 to trip IW and knock her prone. CW has an attack bonus of +16 and a Dex bonus of +6 and rolls a 23 total, scoring 12 points of damage (1d6+6 for high Dex) and forcing IW to make a super feat of Strength to avoid being knocked over. She rolls an 18 and needed to roll an 8 or lower, meaning she hits the floor.

IW has had enough of this nonsense and fortunately can use her Force Sphere while flat on her back. She tries to capture the Princess of Plunder, who must make a heroic feat of Dexterity (roll 2d10) under 27 to avoid it - in other words, she can't help but flip out of the way, and IW is going to have to take another tack if she's going to win this fight.

Panel Three
CW rolls 10 for initiative, and IW 4. CW is going to try to knock IW out again, rolling 27 against a DC of 15 and scoring 3 damage and forcing another super Con feat to avoid falling unconscious for 1 page. IW rolls an 18 this time, passing out and leaving CW to make another stab at cracking the vault.

Cracking the vault will also take 1 page, meaning she'll be dealing with a conscious IW whether she succeeds or not. Cracking the vault, designed by Reed Richards himself, will require a super feat of Intelligence. Catwoman needs to roll a 12 or lower on 3d10, getting a 17 and failing, just as IW returns to consciousness.

Panel Four
CW rolls 9 this time and IW 10. IW decides to activate her invisibility power. Catwoman, noticing that her foe has disappeared, decides to make a run for it. She climbs the wall (a heroic feat, which, with her 19 Dexterity and feat bonus of +6, she can't fail). Normal climb speed is 30 yards per page (or 3 yards per panel), and we'll say the vent CW is heading for is about that high off the ground, meaning she makes it to the vent opening on this round and begins crawling through it.

Panel Five
CW rolls a 16 for initiative, IW 6. CW climbs into the vent. Frustrated, but happy that the vault was not breached, IW heads for an elevator to see if she can catch CW on the roof and continue the fight there.

So, the rules are still pretty rough, but I think they're workable. I think I might lower the attack bonus progression, since Defense Class in Mystery Men! is generally not going to keep pace with attack bonuses the way AC in d20 games kept pace with attack bonuses. I think this makes special attacks too easy to pull off. For that matter, I might change the "knocking out" special attack to a stun for 1 panel special attack. I still need to run some tests with lower powered heroes and something with epic heroes to see how things work at those levels.