The Arabian Knights for Mystery Men! 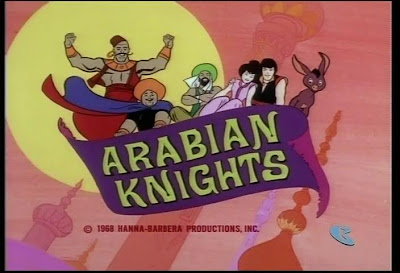 The good people at Hanna Barbera created many, many superheroes back in the day, besides the old Super Friends cartoons. Lots of folks know Space Ghost these days, from his popular talk show if not his fight for cosmic justice, but there was also the caveman superhero Mighty Mightor (awesome beyond belief), Birdman (greatest war cry of any superhero ever) and the Galaxy Trio. As a way to show that Mystery Men! can be used for just about any era of heroics, this post is going to focus on the Arabian Knights.

The Arabian Knights was a cartoon produced for the Banana Splits show. It concerns an deposed prince, Turhan, and a band of super powered allies trying to re-install him on the throne of Baghdad. The cartoons are actually pretty fun and imaginative for the cut-rate production values practiced by HB during that period (though, to be honest, they would get much, much worse). The upside of all these cartoons was that, even though the production values were usually not up to par, the initial design work was done by the great Alex Toth.