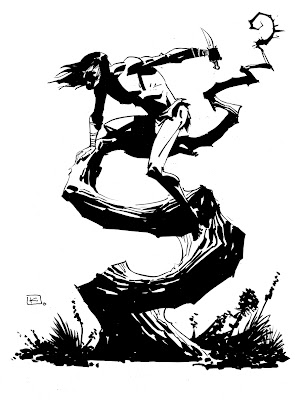 The beastmaster is a human or humanoid raised in the wild by animals. Perhaps the earliest beastmaster in literature was Enkidu, the wild man encountered by the mythic hero Gilgamesh. Romulus and Remus, the legendary brothers responsible for founding the city of Rome, are raised by a she-wolf, though there are no accounts of them having acquired extraordinary abilities.

The earliest beastmaster in modern literature is likely Mowgli, the jungle boy of Rudyard Kipling’s Jungle Book, first published in the story “In the Rukh” in 1893. Mowgli is raised by wolves after becoming lost in the jungle as an infant. Because of this upbringing, Mowgli learns the language of animals. Mowgli also has a loyal animal friend, Bagheera the black panther.

A female beastmaster appeared in 1904 in the form of Rima the Bird Girl in W. H. Hudson’s novel Green Mansions: A Romance of the Tropical Forest. Rima lived in South America, and was feared by the natives for her “magical” powers, which included talking to the birds, befriending animals and plucking poisoned darts from mid-air. Unfortunately, Rima’s story ends in tragedy, as she was burned alive by the native tribesmen.

In 1912, Edgar Rice Burroughs created the most famous beast-master in literature in Tarzan of the Apes. Tarzan was a child raised in the African jungles by intelligent great apes called Mangani. In the wake of Tarzan’s popularity came a wave of books, comic books, movies, radio shows and television shows starring the “Lord of the Apes”. This lead to dozens of imitators, from Bomba the Jungle Boy to Marvel’s Ka-Zar.

From Mowgli, Rima, Tarzan and their many imitators, we can sketch out the special abilities of the beastmaster archetype. He or she must be a person raised since infancy or childhood by animals in the wilderness. The beastmaster’s feral childhood gives them a number of special abilities, but also makes them an outside in the society of human beings.


Beastmaster Class Abilities
Beastmasters cannot speak anything but the language of animals at 1st level. They can pick up a few words of common by 2nd and speak it haltingly by 3rd level.

The beastmaster can camouflage himself in the foliage to the point of becoming virtually invisible if he does not move.

Beastmasters are skilled trackers. When attempting to follow tracks, they can make a saving throw to avoid losing the trail.

The beastmaster is as swift as the animals who raised him. He increases his speed by +3. An unarmored and unencumbered beastmaster therefore has a speed of 15 rather than 12.
Since they are used to fighting without the benefit of armor, beastmasters develop a fluid, mobile fighting style that grants them a flat -2 [+2] adjustment to their Armor Class. 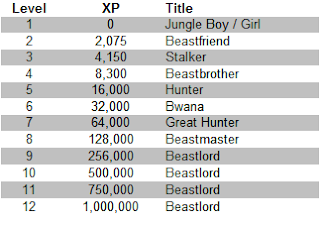 Rima lives in the tropical forests of Guyana. Rima is the daughter of woman who could also speak the secret language of the birds. Rima’s people, it is revealed, were a pacifistic, vegetarian tribe who were wiped out by native tribesmen and plague. Rima is herself hated by the tribesmen who know of her, for they fear her unnatural abilities.

Unlike Mowgli and Tarzan, Rima is not portrayed as a warrior. She is a slight girl with dark hair who wears a smock made from spider webs.
Rudyard Kipling’s MOWGLI, “Little Frog”

Mowgli is a young man from India who was raised from infancy by a pack of wolves. Mowgli’s many adventures include his killing of Shere Khan the tiger and his rescue of the civilized couple who adopted him, his discovery of a great treasure in a ruined temple (and his discovery of what men will do to one another to claim such a treasure) and his leading of the wolves in their war against the dholes.

Mowgli fights using his “tooth”, a long knife that deals 1d4 points of damage. His high strength grants him a +1 bonus to hit and damage in combat. Mowgli’s boon companion is a black panther named Bagheera (HD 3, 18 hp, treat as a leopard).
Edgar Rice Burrough’s TARZAN, Lord of the Apes

Tarzan is actually John Clayton, Lord Greystoke. As an infant, his family was stranded on the West coast of Africa by mutineers. He is raised by a tribe of intelligent great apes after his mother died of natural causes and his father is killed by the leader of the apes. Over the course of his adventures, Tarzan marries an Englishwoman named Jane Porter, fights Germans, explores lost cities and even delves into the subterranean world of Pellucidar.

Although he can pass in civilization, Tarzan prefers his life in the jungle. He usually carries a knife into combat. Tarzan is often accompanied by his faithful Waziri warriors and Jad-bal-ja, the Golden Lion (HD 5+2, 32 hp).