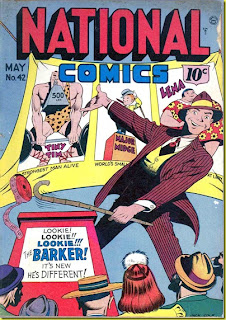 The Fabulous Freak started life as a Delbert Haynesworth, a carnival barker for a "freak show" that traveled with the Dingling Brothers Circus. Delbert, despite his somewhat shabby profession, was a decent man who resented the way his performers and friends were treated by his audience. One terrible night, as the circus was winding down its show, a fire broke out, trapping the freak show performers and killing them. Delbert blamed himself for not being able to save them. He quit the circus after his friends were buried and became a noted bum on the streets of Shore City.

One night, while drowning his sorrows in a bottle of rotgut in the cemetery, he was visited by the spirits of his deceased friends, who he discovered were able to lend their abilities to him. Deciding to punish society (and make a few bucks in the process), he became the super criminal known as the Fabulous Freak! His current whereabouts are unknown.

Note - the picture has nothing to do with the Fabulous Freak, who is an original character. It just fit the bill!
Posted by John Matthew Stater at 10:18 AM