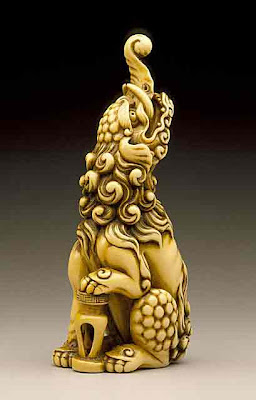 Let's do another round of Mu-Pan monstrosities ...

On a side note - I really want to commission an illustration of the shamshir (4-armed snakey dudes), but I'm having no luck contacting artists. If you're an artist and you're up to making some bucks, let me know. If your rates are reasonable enough, I might have a couple other commissions to go along with it.

A baku is an otherworldly creature that devour dreams and nightmares. It has an elephant’s trunk and tusks, rhinoceros’ eyes, ox tail and tiger paws. They constantly project a magic circle against evil and are capable of dispelling nightmares and curses (per remove curse). Baku can travel astrally and ethereally.

These frightening ghouls appear as lovely women with extremely long hair. Their hair is tipped with barbs and can be controlled by the ghoul and used to attack and grapple. Barbed women usually attack young men. When a young man is encountered, the barbed woman laughs at them. If the young man laughs back, the barbed woman attacks. Barbed women eat the people they kill.

The kamaitachi is a bizarre monster that looks like a trio of weasels with sickle-like claws riding on a swirling wind. The monster has three “attacks”, each made by a separate weasel. The monster gets three attacks per round, and uses the first to attempt to knock its opponent prone.

Monkey folk are intelligent monkeys that dress and behave like humans. Being monkeys, they are chattery and sometimes unpredictable. Monkey folk are known for their high dexterity and strength (+1 bonuses). This strength allows them to wield weapons meant for man-sized creatures without penalty. They are expert climbers.

Large troupes of monkey folk are led by a sage (5th to 8th level shugenja). He is assisted by two apprentices (2nd or 3rd level). For every 20 monkey folk there will be a 3rd level ninja, and for every 100 a 5th level ninja. Most monkey folk wield staves or nine ring broadswords. When they wear armor, it is rarely heavier than a haramaki, but a few bodyguards will wear haramaki-do (AC 15).
Posted by John Matthew Stater at 12:01 PM