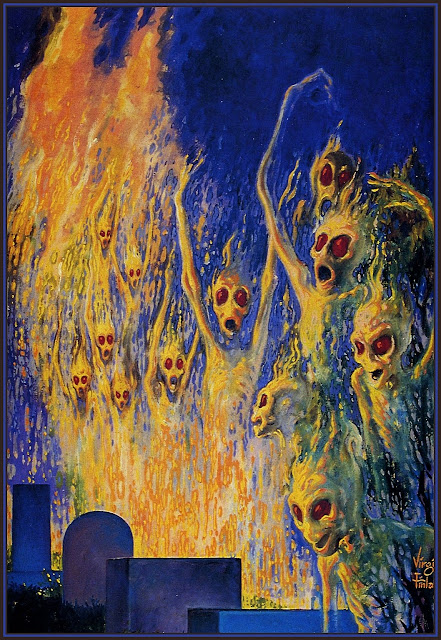 110.100 Ghala-ghilan: Ghala-ghilan is the gruesome city-state of the ghouls and ghasts and their hideous lords. The city houses 5,000 ghouls, 1,500 ghasts and their slaves/cattle, which number 1d10 x 1,000 humanoids at any given moment. Ghala-ghilan has sandstone walls topped by a hundred onion domes cast in bronze and painted with black enamel. In each tower there is a squad of ghouls armed with slings and crude axes. The streets of Ghala-ghilan are wide and covered with a damp, slimy film. The buildings are sandstone towers rising 30 to 50 feet in height, with flat roofs topped by memorial statues stolen from cemeteries all over the world. Amidst these towers there are long palaces with colonnades.

The ghouls need not eat often, so when they do slaughter their herds of humanoid slaves, they hold grandiose feasts with strangely sedate and dainty entertainments.

112.99 Celestial Army: An army of luminous aasimar has gathered here for an assault on Ghala-ghilan, the city of ghouls [110.100], for the ghouls have stolen something precious to the powers of Law, the legendary Pistis Sophia. The paladin Eaduvenius leads the bright host, who are now camped in white pavilions (regrettably sullied by their long trek through the Underworld) flying white pennons emblazoned with various symbols holy to the forces of Law. The army numbers 25 companies of heavy infantry and 50 companies of light infantry and archers. Almost all of them are drawn from the Farukh, the descendants of the Heavenly Host that once descended to Nod to destroy the wicked city of Irem and stayed to long. The Farukh dwell in the hills outside of the city-state of Guelph. In addition to the warrior, the army has about 300 bearers and handlers to look after the giant lizards used as pack animals, and ten packs of blink dogs.

117.64 Hot Cave: There is a deep, dank, damp cave here that is heated by a thermal vent and mineral spring. The interior of the cave and much of the exterior is covered by a massive yellow musk creeper. The cave is always filled with 3d6 yellow musk zombies and encounters with 2d4 zombies occur in this hex on a roll of 1-4 on 1d6 per day.

120.63 Exploding Pool: A simple pool in this hex is bordered by white stones that glow lightly. Should a person try to drink from it, the fountain explodes into a water spout, throwing them 1d10 x 10 feet into the air. Should one attempt to ride this spout to the top (requires a dexterity check on 2d6+12) find they can access a chamber carved into the ceiling that contains a great trove of treasure guarded by an ancient water elemental.

121.66 Tormented Mephits: Ten fire mephitis have been chained to the ground here near a frosty cave. The cave is inhabited by three frost giant brothers, Frimli, Giri and Hundi and their pet small white dragon, Snurl. The giants torment the mephitis from time to time, carrying small torches near them and then snapping them away.