The "S" Word in Blood & Treasure

While I've been scrambling to finish NOD 12 by the end of the year, Blood and Treasure and Space Princess have been simmering on the back burner. B and T is about 80% complete - all the monsters, spell and magic items converted, classes written, basic rules finished - and is mostly waiting for some info on high level play (strongholds, wargames, magic research) and a sample delve. Space Princess needs some modifications to the rules (fairly minor) and a formal writing down of the sample delve. They'll probably both be available in January of 2012.

In the meantime, here's a look of how non-combat actions can be resolved in the game (i.e. skills, one of the dirtiest words in Old School gaming). Also, a preview of the game's iconic thief. 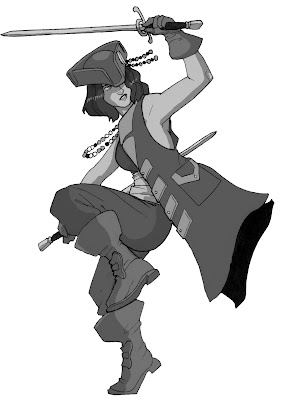 The concept of “heroic tasks” covers everything from climbing a sheer wall to riding a dragon. Brushing one’s teeth or stepping over a puddle do not qualify as heroic tasks, and characters can do these and most things automatically, without rolling any dice. Accomplishing very difficult (or almost impossible) tasks, on the other hand, does require a player take dice in hand and roll to discover his character’s fate.

For each of the heroic tasks described below, the conditions of the task are described as either “easy” or “difficult”. If somebody meets the definition of an easy task, they need not roll dice to see if they succeed. Success is assumed.

For people attempting a difficult task, dice must be rolled, and failure imposes consequences.

The actual dice to be rolled and the number needed for success depends on whether the person attempting the heroic task is unskilled, unskilled but has a knack or skilled.

UNSKILLED: An unskilled person can succeed at a difficult task by rolling 1d20, adding the relevant ability modifier, and trying to equal or beat an “18”. Alternatively, you can simply roll 1d6 and attempt to roll a “1”.

KNACK: An unskilled person with a knack for something (such as an elf’s knack for finding secret doors or a gnome’s knack for listening at doors) can succeed at a difficult task by rolling 1d20, adding the relevant ability modifier, and trying to equal or beat a “15”. Alternatively, you can simply roll 1d6 and attempt to roll a “1” or “2”.

SKILLED: A character skilled at a heroic task improves his chances of success as he or she advances in level. A skilled skill check is made by rolling a saving throw, modifying the 1d20 roll with the appropriate ability score modifier.

In some circumstances, a Referee can alter which ability is associated with a heroic task, and therefore which type of saving throw. Such is the power of being a Referee!

MULTIPLE DIFFICULTIES
If a heroic task you are attempting involves more than one difficulty, a -2 penalty per extra difficulty is applied to the dice roll. For example, riding a mount during combat is difficult, and therefore requires a skill check for success. Riding an untamed flying mount that has been frightened during combat involves four different difficulties, and thus imposes a -6 penalty (-2 per difficulty beyond the first) to the skill check to avoid failure.

BEND BARS (STRENGTH)
Adventurers tend to get themselves into trouble, either by breaking into a monster’s home and stealing its loot or by failing to pay the king’s taxes on said stolen loot. This means that they might end up in the king’s dungeon or maybe on the wrong side of a portcullis with thousands of angry kobolds rushing towards them.

EASY: Bending bars is only easy if the bars are made of a weak metal, like gold, or very rusty iron bars. Using a tool might make bending bars an easy task as well.

FAILURE: The bars do not bend.

SKILLED: Elves have a knack for finding secret doors.

NOTE: Finding a secret door does not necessarily mean opening a secret door. Many secret doors require special catches to be tripped (a book pulled from a bookshelf or a wall sconce pulled down, for example). Characters who cannot figure out how to open a secret door may have to batter it down (see Battering Doors above).

HIDING (DEXTERITY)
When an adventurer finds themselves hunted in a hostile dungeon or fortress, hiding might come in handy.

FAILURE: You are noticed by an observer.

NOTE: If wearing camouflaging clothing (i.e. green in a woodland, black when hiding in shadows) you may receive a +2 bonus to your dice roll.
Posted by John Matthew Stater at 4:03 PM