Ah - December! The crisp air, the smell of expensive holiday-themed candles, fruit cakes ... it always brings one thing in particular to my mind. Martians!

In particular, the hapless buggers who dared kidnap Santa Claus. Having had the annual viewing of the MST3K classic riffing of Santa Claus Conquers the Martians, and with the eminent release of Space Princess, I figured it made sense to mash the two together. When the Christmas season rolls around and you've gathered your friends to play some Space Princess over a glass of eggnog, you'll be well prepared.

Martian
The Martians are green-skinned humanoids of a (formerly) warlike race. From an early age Martians are educated by thought waves projected from computer banks and received by cybernetic antennae jutting from helmets almost always worn on their heads. These helms act as communicator devices (see Super Science). Martians arm themselves with freeze ray guns. Most wear skin-tight green costumes, while leaders are designated by their use of cloaks.

Martians dwell in subterranean cities that abut their famous canals, which transfer water from the poles to the warmer climes. Martians require very little air and are immune to cold. Despite their planet's lower gravity, they appear to be just as strong as human beings.

The elders of the Martian race are called chochems. These mystics can employ four psychic powers. They dress in robes and carry staves.

For the past generation, Kimar has served as the leader of the Martian people. It was he who personally led the expedition to bring Santa Claus and Christmas to the Martians. In the time since the arrival of Santa, the Martians have become less warlike and more generous. Still, some elements among them seek a return to the old ways. A leader among these rebels is Voldar, a mustachioed thug with a cruel sense of humor. 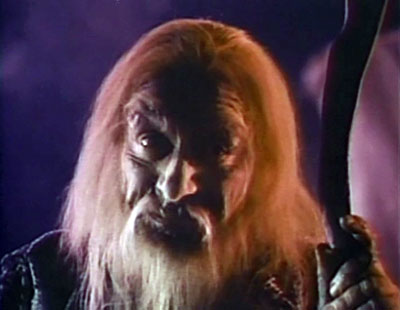 By the way - if any artist out there would like to draw their rendition of Capt. Kirk performing his famous flying kick on Voldar while Santa and Spock look on, well, I'm sure we'd all like to see it!