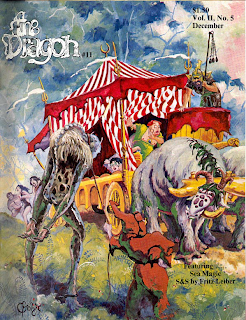 Merry Christmas 1977! I would have been five, having my first Christmas in Las Vegas and opening, well, I have no memory of what I received for Christmas when I was five. I'm sure I was stoked. What were Dragon magazine subscriber's opening?

First and foremost ... best cover yet. A wagon of startled doxies pulled by God-knows-what is accosted by a red-robed dude and his captive troll while the triple-flail-armed driver looks on. Nice! Painted by Elrohir.

Second ... an ad for newly released miniatures of the various demons plus Orcus and Demogorgon. The Type VI looks more like "naked guy with wings" than they are typically portrayed, which I think makes him creepier than the "OMG DEMON!" look. 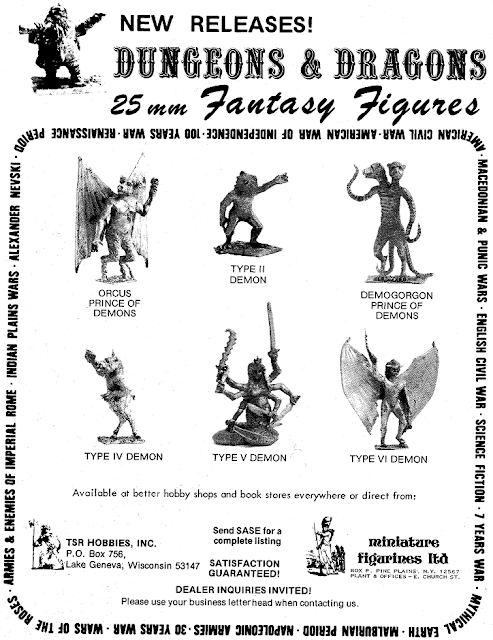 Big announcement from Tim Kask ... Dragon is going monthly! Oh, and they're finally sending checks out to authors and artists! He also announces coming fiction in The Dragon from L. Sprague DeCamp and Andre Norton, as well as fiction from Fritz Leiber in this issue.

Gygax now chimes in with a defense of TSR defending its intellectual property from cheap and crappy imitations and outright theft in the form of reprints of D&D material. He has some nice words for GDW, but seems to be telling everyone else to piss off. He also mentions the coming release of the AD&D Monster Manual and future release of other AD&D material.

Enough announcements and editorials ... let's get to the gaming.

Rob Kuntz presents a system for Brawling (The Easy Way "Out" in D&D) which, at first glance, is way more system than I need. Brawling and grappling are always a problem, it seems, because they offer the chance of knocking someone out or disabling enough to make them an easy kill, thus tons of extra rules. This one compares ability scores of the fighters to get a modifier, and then a dice roll to score "damage" to one of the ability scores. Grappling, for example, involves averaging the dexterity and strength of both combatants and comparing them on a grapple table, then rolling 2d6 to discover how it works. Punching is similar, but determines the amount of damage.

Tony Watson then explains how to stop good old O.G.R.E. (not the monster, the mega-death machine) - basically tips and tricks for the game. I played it once, O.G.R.E. won, and my yen to play O.G.R.E. was satisfied.

In the Design Forum, Thomas Filmore, who opines on the value of role playing in D&D, as opposed to just wargaming. Pretty common blogpost material here, but perhaps a rather new concept back in the day, when many characters did seem to be more about puns and action than deeply invested backgrounds (i.e. the good old days).

Archive Miniatures has an ad for Star Rovers - 25mm miniatures. I dig the names of the figures, all of whom would be at home in a game of Space Princess: Planetary Scout, Funky Robot, Andromeda Annie, Bianca Snow, Doc Crock, Galactic Centaur, Alien Lizards, Walktapus (pre-Runequest?) and Sassanid War Elephant. Wait, Sassanid War Elephant? Why not. 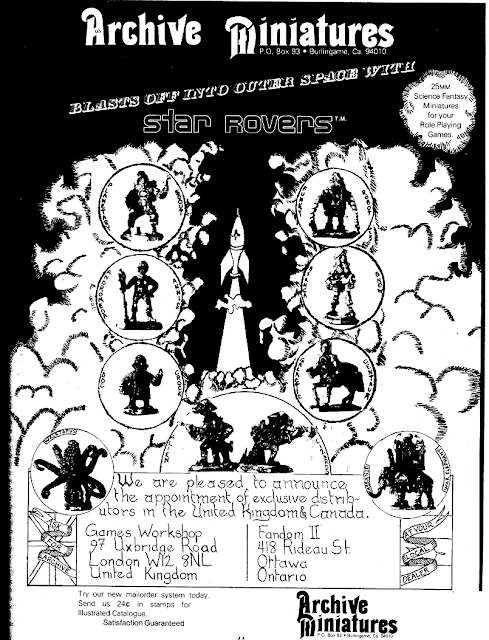 MAR Barker continues answering reader questions in his Seal of the Imperium article.

Next up are some expansions to the Snits game that was featured last issue. Apparently the snits took the world by storm.

The Sorcerer's Scroll is a new feature, and this first one is written by Rob Kuntz. Here, he mostly goes into the new Monster Manual (with "stupendous art by David Sutherland, David Trampier and Tom Wham") and the eventual release of ADVANCED DUNGEONS & DRAGONS (I forgot that it was always written in all caps ("Fighters will now take 10-sided dice to determine their hit points and clerics 8-sided, etc."). He also mentions Judge's Guild, who continues to "saturate the D&D market with new variants" (and that TSR has undertaken to "make their new rule variant/additions ... much more refined and interesting to the hard core D&D player" - I don't like the sound of that). He has some kind words for Chivalry & Sorcery, but explains that it falls short due to its "smallish" print.

Fritz Leiber is next with Sea Magic. An excerpt:

"On the world of Nehwon and in the land of Simorgya, six days fast sailing south from Rime Isle, two handsome silvery personages conversed intimately yet tensely in a dimly and irregularly lit hall of pillars open overhead to the darkness. Very strange was that illumination — greenish and yellowish by turns, it seemed to come chiefly from grotesquely shaped rugs patching the Stygian floor and lapping the pillars’ bases and also from slowly moving globes and sinuosities that floated about at head height and wove amongst the pillars, softly dimming and brightening like lethargic and plague-stricken giant fireflies."

James M. Ward now presents Quarterstaff Fighting Rules. This is like a mini-game that could be integrated into a normal game of D&D - somewhat like the jousting rules from Chainmail.

In Tramp's Wormy, Wormy asks a bunch of dwarves "What wears chainmail and looks like black pudding?" - any guesses?

In Fineous Fingers, the adventurers discover that the evil wizard Kask has forced the local hobbits to try to conquer the city by capturing their princess.

The issue ends with a withering critique of NBC's The Hobbit, by Rankin-Bass. I know, not the best adaptation, but I dig the design on the wood elves.

Overall, an issue that leaves me of two minds. I'm a big fan of Leiber, so the short story was cool. The EPT and O.G.R.E. stuff is not really aimed at me, so no complaints there. The brawling and quarterstaff fighting are nice mini-games/sub-systems, but probably not things I would include in my regular D&D game. Strangely enough, it's often the ads that I'm enjoying the most - little snippets of creativity with no rules/stats attached. There's the suggestion that in 1977, the creative energy of D&D is slipping away from TSR - they have some pretty good modules left in them, of course, but things are becoming more controlled and professional, and that carries with it a price to pay.
Posted by John Matthew Stater at 2:53 PM