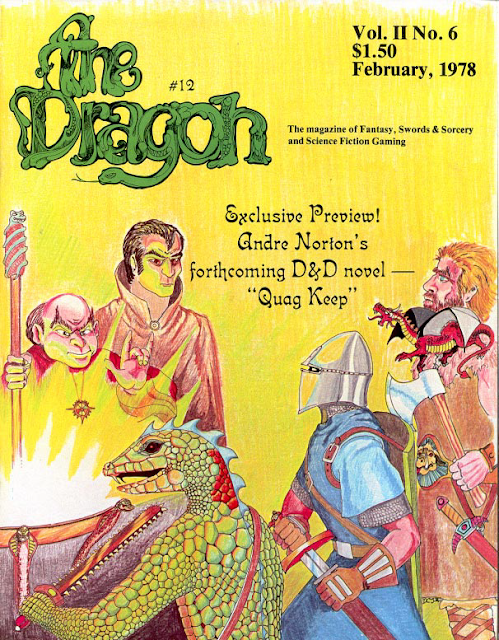 The cover of this baby trumpets an exclusive preview of Andre Norton's D&D novel, Quag Keep! Let's see what else this issue has to offer ...


The first article is Leon Wheeler's The More Humorous Side of D&D, which, if I'm honest, is the literary equivalent of "Let me tell you about my character". My preference was for the little illustration ...

Simple but effective line art ... something missing from the more modern products, I think. But maybe I'm just an old fart.


Up next is a "D&D Variant" - A New Look at Illusionists by Rafael Ovalle. Rafael's illusionist has a 7% chance per level of discerning an illusion created by a creature (i.e. rakshasa, succubus, leprechaun) and, if I'm reading this correctly, always can tell another illusionist's handiwork. Their spells can affect astral and ethereal creatures because they involve light. A few new spells are added as well, including improved displacement, sensory displacement, discord, gaze of umber hulk, create spectres and basilisk gaze.


Jerome Arkenberg now provides us with The Persian Mythos. This is a quick list, and provides an Armor Class, Move, Hit Points, Magic Ability, Fighter Ability and Psionic Ability for each of the deities. Vohu Manah, "Good Mind", for example, has the following stats:


Short and sweet, and probably enough to run a combat, if a combat was actually needed.  I'm sure more modern players will scoff at the AC, which would be 17 or 18 in modern games, but with 250 hit points and all that magical and fighting ability, it's probably sufficient to clean a few old school clocks. More importantly, a combat encounter with this guy in old school rules would last about as long as it would with new school rules, just without a page of stats that will largely turn out to be useless.


It's actually a pretty thorough list, and includes several heroes and archdemons. 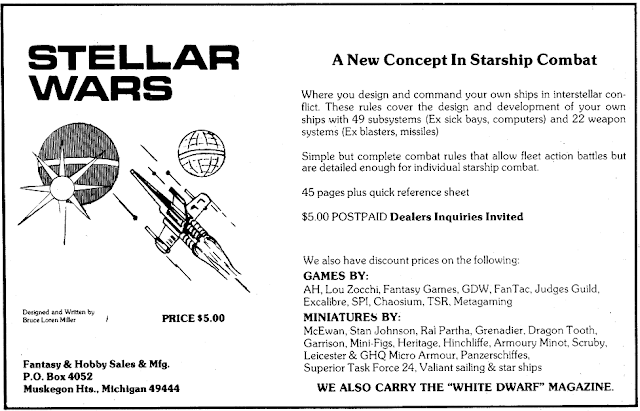 
In the Design Forum, James Ward lends us Some Thoughts on the Speed of a Lightning Bolt. In the article, he sings the praises of the new rule (or variant rule) on melee rounds in Eldritch Wizardry. It's an odd article that, these days, would just be a post on a forum discussing the new TSR book.


James Endersby and John Carroll now offer another "forum comment" describing a Ship's Cargo from some game they played involving a voyage to Japan.


James Bruner now has an article about The Druids. Probably a good synopsis of the current knowledge on druids, but much of what people thought of the druids in the 1970's has turned out to be faulty. Still, some of it appears to be dead on, and I'm sure it was a useful article in its day, if only to veer people away from the "Druid = Fantasy Hippy" syndrome that sadly persists to this day.

If the Persian gods weren't enough for you, Rob Kuntz now presents The Lovecraftian Mythos in Dungeons & Dragons. Apparently, J. Eric Holmes was primarily responsible. So, here's what you all want to know ...

Magic Ability: (see below) [when you see below, you see nothing about magical ability]


Those who see him must save vs. fear, and if released from his sleep, all within 100 miles must save or go insane. He regenerates 10 hit points per round, can teleport 1/2 mile, is resistant to water, cold and vacuum and can call 10d10 deep ones up from the sea bottom. He retreats from the Elder Sign. He can attack physically and psionically each round - meaning, I suppose, that he can make an attack and use a psionic power each round.

A later issue has stats for Conan. When I come across it, I'll have to pit Conan vs. Cthulhu and see how it turns out. 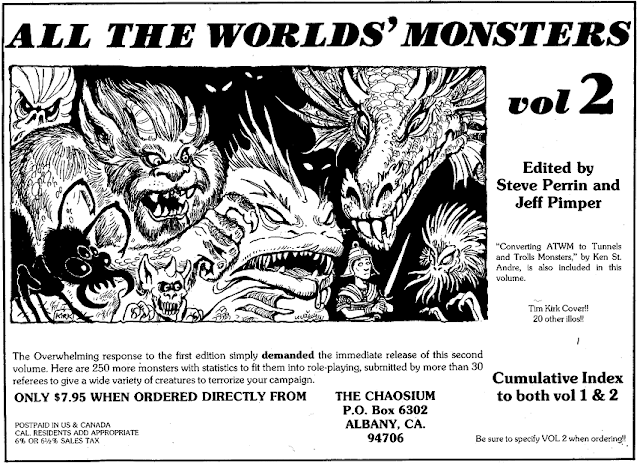 Another great ad, this time for All the World's Monsters vol. 2.

It is followed by a quick, unbiased review for the new AD&D Monster Manual. The review calls it "An absolute must for every D&D enthusiast everywhere".

The preview of Norton's Quag Keep is next ...

Milo Fagon, swordsman, and Naile Fangtooth, were-boar berserker, have met in an inn in the Thieves’ Quarter of Greyhawk. They have one thing in common, each wears on his wrist a wide copper bracelet in which are set a number of unusually shaped dice. Puzzling over this strange bond, they are also uneasily aware that something momentous is about to happen to them both, though they cannot see that any of the other people in the inn are paying any attention to them.

Well, not a terrible issue - the pantheons might have come in handy, but much of the rest seems like the equivalent of chit chat. We finish with the following ... 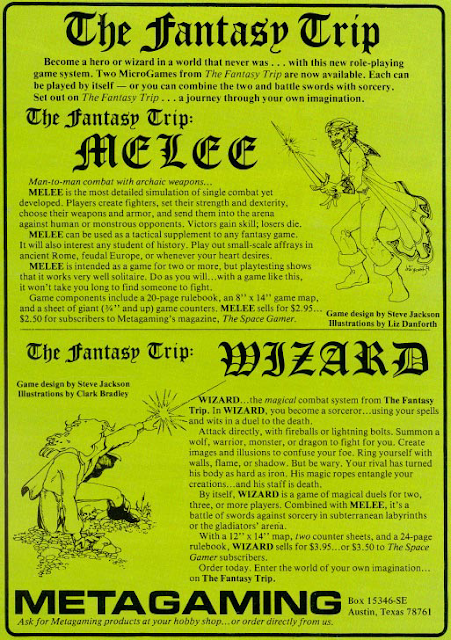