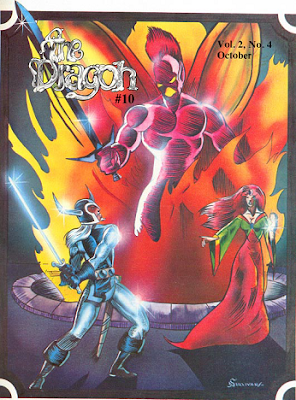 Can you feel the chill in the air - that crisp chill of Autumn? Well, of course not. It's July in the here and now, and just reading a magazine from October isn't going to change that unless you have a rather powerful imagination or have been dipping into the pseudo-pharmaceuticals. Let's see what Gygax & Co. had in store for us 35 years, when the leaves of Lake Geneva were beginning to change*

The article posits the problem of too much wealth in the game. To this end, Pickens decided that treasure should only be translated into XP when it was spent. Since you can only have so many suits of platemail, 10-ft. poles and weeks of iron rations, players need something else for which to spend their gold. Pickens provides the following avenues of expenditure:

Paul Montgomery Crabaugh presents Random Monsters - by which he means monsters generated randomly, not random wandering monsters. Naturally, I need to generate at least one (which I suppose I really should include in Blood & Treasure):

Now I need to roll for special characteristics, which is an odd percentile table. For a 7 HD monster, I'm going to assume it works as follows:

I roll a "92" (no, really, I swear it) and thus my monster has three special characteristics. I need to roll d24 for these (if you don't know how to roll d24, I just feel bad for you) and come up with the following:

I have a very hostile monster, apparently. But he doesn't hate cans ... he hates spellcasters. This makes his anti-magic shell make pretty good sense (ah, the wisdom of dice!)

I now roll another D% to see if it has "other characteristics", and a roll of "61" tells me it does not (otherwise, it could have some insect characteristics).

So, what do we end up with?

Almesiths are strange beasts that are spawned from the residual energies of powerful spellcasting, living embodiments of nature's abhorrence of magic. They are most often encountered in the deeper levels of dungeons, and seek out spellcasters for destruction. Almesiths look something like owlbears, and can be mistaken for those sorcerous creations. They differ in size, being no taller than a man, coloration, being covered in dark grey feathers on their arms, legs and backs and softer, white and grey spotted down on their bellies, and in two additional curiosities: They lack mouths, having instead a stirge-like tubular beak that juts 3 feet from their faces, and in that they have a third arm that juts from their chest. Almesiths attack with their large, hooked claws, and generate a natural anti-magic field (as a 7th level caster) in a 60-ft. radius. In combat, they always focus their attacks on spellcasters (clerics, druids, magic-users and sorcerers first, bards second, assassins, paladins and rangers third), ignoring attacks by non-spellcasters even when it threatens to kill them.

In the Design Forum, Richard Gilbert presents Let There Be Method To Your Madness. This is another in the series of "dungeons should usually make some rational sense" articles; the attempt to bring the retro-stupid branch of the RPG world to heel that persists to this day. I think these two camps can best be described as Phoebe vs. Rachel.

Next up is a mini-game ... Snit Smashing, in which a Bolotomus waits to smash the Snits that run from the ocean so they can plant their snotch in a Snandergrab. If the Snit player manages to multiply more rapidly than the Bolotomus player can smash them, he or she wins. For the Bolotomus to win, he or she must destroy all of the Snits.

When you're through smashing snits, you can proceed to P. M. Crabaugh's next article, entitled Weights & Measures, Physical Appearance and Why Males are Stronger than Females; in D&D (weird use of a semicolon). If the feminists in the audience are getting their hackles up, they might want to read the article first, they might want to read the article first. The article posits an additional 3d6 stat - Size - which can translate into bonus hit points and a modifier to carrying capacity. Yeah, males get some extra carrying capacity ... and females get a +2 bonus to Con and a +1 bonus to Dex, and men get called "thick-fingered clods with facial hair". The old "trash men to keep the feminists from calling you insensitive names" ploy. A classic.

The next article is Gaining a New Experience Level by Tom Holsinger. He explains that what D&D and EPT really need is some sort of dangerous ritual for characters to undertake when they have enough XP to advance in level. To which I reply, "Huh?" Favorite line in the article:

"The sacrifice of humans is generally forbidden in a populated area because too many people get upset."

The article is actually pretty tongue-in-cheek, and would make for an interesting campaign. Essentially, it creates a sub-game that involves getting the gods' attention with sacrifices or sacrilege, then assuming the "proper physical and psychic attitude, i.e. complete exhaustion", which, Holsinger assures us, can only reliably be done by becoming thoroughly inebriated, during which the Emissaries of the Gods, the Great Pink Elephants, come to the character and imbue them with their new Hit Dice and special abilities. The level limits for elves, dwarves and halflings are, he tells us, because they have a harder time getting drunk. It is also why high level characters move out of town and build castles - with more hit points, they have to get super shit-faced to attract the attention of the gods, and that might mean burning things down and causing other massive disruptions to the lives of the common citizenry. This article actually dovetails nicely with Orgies, Inc. and together they could make for one hell of a fun campaign.

Next up, Edward C. Cooper's The Tactics of Diplomacy in Stellar Conquest. Honestly, I don't know the game and so I'm not going to comment on the article.

In Wormy, the eponymous dragon is contemplating stumping some angry dwarves with a riddle. They're angry because Wormy stole their bowling balls to use on his pool table. Meanwhile, Fineous Fingers is under attack by a whole guild of murderous hobbits.

And that's it for October 1977. Good issue, I think. I have to run and set up an inflatable pool now, but I have a couple neat ideas in store for next week. Oh, and I finished writing Blood & Treasure yesterday ...

Would they be changing in October? I've lived in Las Vegas my entire life - Summer temperatures only finally end around the last week of October, and the leaves may not change here until well into December. Basically, I have no idea how seasons are supposed to work.
Posted by John Matthew Stater at 11:33 AM